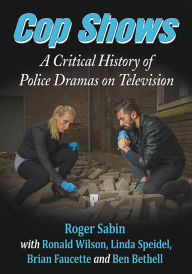 The development of television police series is traced chronologically from Dragnet (premiered in 1951) to Justified (2010). Nineteen shows get full-chapter treatment, including recommended episodes and guides to further reading, while a 20th chapter considers dozens of others in a paragraph each. The subjects are well chosen, among them Highway Patrol, Naked City, Hawaii Five-O, Hill Street Blues, Cagney & Lacey, Law & Order, NYPD Blue, CSI: Crime Scene Investigation, and The Wire. The summaries of the programs, their style, characters, social or political slant, and historical significance are efficiently done and mostly free of academic jargon. Though three of the five authors are British, coverage is limited to American product.

In the principal author’s generally excellent discussion of Columbo, some of the history gets scrambled: the pilot, which appeared as a TV movie in 1968, was not part of a revolving NBC Mystery Movie lineup; that series was inaugurated in September 1971 with the third Columbo case, “Murder by the Book.” And surely the contribution of Dial M for Murder to the popularity of inverted detection is attributable to Frederick Knott’s play and Hitchcock’s film more than to a later BBC TV series.

MysteryScene RT @PoeMuseum: This morning we turned on the Enchanted Garden Fountain for the first time since 2019. The museum is almost ready for visito…
15h • reply • retweet • favorite