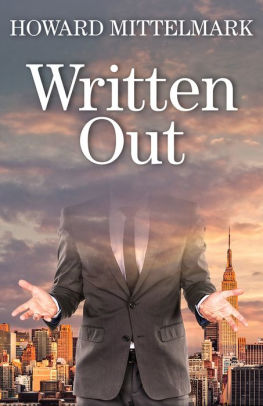 I laughed my way through the sardonic pages of Howard Mittelmark’s Written Out, wherein our hero Roger Olivetti proceeds to shoot himself in the foot again and again and again. A onetime high-flying novelist and editor at a New York publishing house, poor old Roger loses his job, his Manhattan apartment, his marriage, and ends up crashing in his mother’s much-hated basement on Long Island. And it’s all his fault. He has big plans, though, such as finally sitting down to writing that breakthrough novel he knows he’s capable of. But first, he decides to get drunk. Bad decision. He winds up having sex with a mobster’s ex-wife. The mobster, being of a kindly nature, only breaks a few of Roger’s toes, leaving his fingers free to type out his self-proclaimed masterpiece. Enter writer’s block. Limping only slightly, he turns his back on his stalled novel and sets off to find a new job in publishing. But, oops! He finds himself blackballed because he slept with his own agent’s wife. Roger’s penchant for making bad decisions eventually leads him to a job in a vastly different industry—that of hit man. Gritting his teeth, he duly knocks off an elderly woman who belongs to his mother’s book group, and after that, another old lady. Hey, a man’s gotta work, right? But being a hit man turns out not to be as much fun as it is in the movies, so when his own ex-wife’s new boyfriend, a big-time Hollywood star, offers Roger the job of ghostwriting his memoir, he jumps at the chance. Again, there’s a problem. The star doesn’t want a standard memoir—he wants it written from the point of view of his enormous penis. Thus Roger’s woes continue, almost all of them caused by his utter idiocy. In a way, Written Out is a modern twist on Voltaire’s Candide, and it offers many snarkily amusing insights about today’s publishing industry. In one hilarious passage about a famous female novelist, Roger muses, “Famous novelists weren’t actually famous, they were just famous to other novelists who aspired to being famous novelists, and to readers, who still only aspired to being novelists. The only novelists that were genuinely famous were famous for being rich novelists, not for having written novels.”