Charlaine Harris’ Novels Back on the Screen
Oline Cogdill 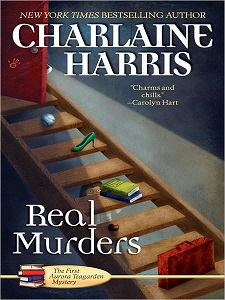 The seventh and last season of True Blood—based on Charlaine Harris’ Sookie Stackhouse series—begins at 9 p.m. June 22 on HBO. But look for another one of Harris’ series to come to television.

Harris’ Aurora Teagarden books are going to be brought to the Hallmark Channel as a series of two-hour movies.

The movies will star Candace Cameron Bure, who you may remember in the role of D. J. Tanner, the eldest daughter, on the television series Full House, which she played from ages 10 to 18.

The plan is that these two-hour made for TV films might be on the air as early as January, but that is still to be determined. As we all know, when dealing with the film/TV industry, anything can happen.

Harris is thrilled about the prospect of bringing this much loved series to the screen.

“I am very cognizant that this will be a really different product and process from my experience at HBO, and I look forward to learning even more about how things work on the west coast,” Harris told Mystery Scene in an email.

I loved this series by Harris and it should make an entertaining addition to the Hallmark Channel. The series began in 1990 with Real Murders and Harris published six novels about Aurora Teagarden, but there is plenty of groundwork for more stories.

The Aurora Teagarden novels are set in a small Georgia town where librarian Aurora "Roe" Teagarden is a member of the Real Murders Club, which meets once a month to analyze famous cases. This pastime becomes real when a member’s murder eerily resembles the crime the club was about to discuss. Other “copycat” killings follow.

Harris’ latest novel is Midnight Crossroad, which begins a new series for this author.