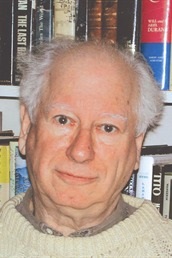 This year, the Crime Writers of Canada adds a new aspect to its annual Arthur Ellis Awards—a Grand Master.

This is the inaugural year of the Crime Writers of Canada’s Grand Master Award, intended to recognize Canadian crime writers who have a substantial body of work that has garnered national and international recognition.

Howard Engel, left, the author of the award winning Benny Cooperman detective series, has the honor of being the group’s first Grand Master. In its announcement, the Crime Writers of Canada stated “A mainstay of the Canadian crime writing scene for many years, Mr. Engel helped put Canadian crime writing on the map at a time when few mysteries were set in this country.”

The Crime Writers of Canada was established by Derrick Murdoch, a prolific Canadian crime fiction reviewer, in 1982, and has sponsored the Arthur Ellis Awards for Crime and Mystery Writing for 30 years. Engel is among the group’s seven founding members.

And in case you are wondering where the name Arthur Ellis came from, here’s a bit of history. “Arthur Ellis” was the pseudonym for the man who became Canada’s hangman in 1912. Among the various categories, the organization annually awards the Unhanged Arthur Award, which recognized and promotes the careers of emerging crime writers.

All awards will be announced during the group’s annual banquet, scheduled to be June 5, 2014.

The 2014 Arthur Ellis Shortlists for Excellence in Crime Writing