"Though I am not naturally honest, I am so sometimes by chance."
—William Shakespeare, The Winter's Tale, 1611 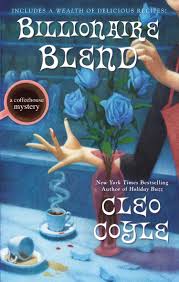 Author Cleo Coyle again allows witty protagonist Clare Cosi to strut her stuff in this 13th installment of the Coffeehouse Mystery series. The novel percolates nicely, a smooth yet stimulating brew. Clare, the manager of an upscale coffeehouse in New York City, is approached by billionaire tech whiz Eric Thorner to create the world’s most expensive coffee blend. When a bomb goes off outside the coffeehouse, almost killing Thorner, Clare is propelled into the mogul’s rarefied lifestyle of private jets, overseas jaunts, Michelin-starred restaurants, designer couture, and cutting-edge technology.

Thorner’s generosity does come with strings. In addition to complying with his employment offer, Clare must fend off his romantic overtures. What’s more, some people affiliated with Thorner meet suspicious ends. Is Thorner the culprit? Clare’s former spouse and current beau New York cop Mike Quinn don’t trust the successful nerd. There are times when Clare herself has doubts about his innocence as she works through a maze of duplicity and corporate intrigue.

Coyle’s narrative is chock-full of delightfully delineated characters, such as this depiction of Thorner’s hostile and inebriated sister: “Draped in a jewel-trimmed gown of aquamarine with a daring slit up one leg, and a décolletage nearly to her navel, she seemed wobbly as she walked, but I couldn’t tell the cause—the six-inch fetish heels on her pedicured feet? Or the oversized martini in her manicured hand?”

Cosi, whose name warms the heart of “cozy” mystery fanciers, is smart and savvy. Her sense of humor infuses Billionaire Blend with just the right amount of froth.

Food and coffees are also expertly described. Connoisseurs of coffee will appreciate the discerning palate involved in tasting and evaluating the distinctive blends. An added bonus for foodies are the recipes that follow the tale’s conclusion. Both the story and the culinary instructions make for delectable reading.

A stimulating brew of romance, intrigue and danger for coffeehouse manager Clare Cosi.

"One corpse is usually more than enough. By anyone's standards, three is far too many."