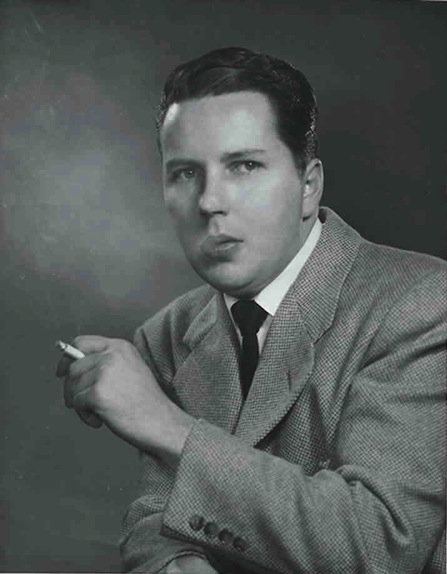 He coulda been a contender

Sure, everyone knows Chandler and Hammett and Macdonald, but the hardboiled highway’s jammed with broken heroes who never quite made it. A case in point is William Ard.

Ard coulda been a contender. He was one of those writers who mined the pulp fiction vein to much success and acclaim, and he had potential in spades, only to be almost completely forgotten a few years after he was gone; a journeyman writer who burned bright and hot for a few short years.

His career lasted little more than a decade, fitting almost exactly into the ’50s. His first novel was accepted in November 1950, and he passed away in March 1960. But in those ten short years, he produced a staggering amount of work in both hardcover and paperback for both the crime and Western markets. As Jonas Ward, he cranked out a string of almost two dozen Westerns featuring rambling West Texas gunfighter Tom Buchanan, and under his own name (as well as several pen names, including Ben Kerr, Thomas Wills and Mike Moran) he wrote another 30 or so crime novels, most of them hardboiled affairs featuring tough private eyes, mostly from New York.

Do the math. Ten years. Fifty-five or so books. That’s five books a year, easy. Enough for new books to be regularly published, often as paperback originals, for several years after his death. Whatever else he might have been doing, Ard wasn’t kidding around.

A former Marine, Ard graduated from Dartmouth in 1944, and worked for the Buchanan Ad Agency in New York. Her met his future wife, Eileen, there. The two were married in 1945, and Ard soon left to take a job as a publicist for Warner Bros. Early author biographies suggested he also worked, briefly, just after WWII, as a detective. 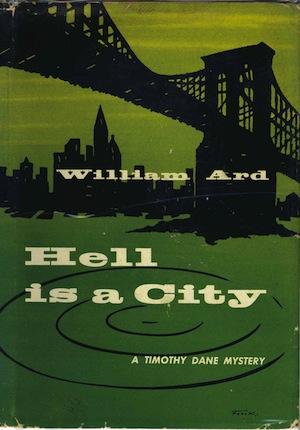 But “he always wanted to be a writer,” Eileen recalled. “He started writing short stories in college. I don’t know where they are now, but when he started with Warner Bros., he decided he would just write.”

In 1947, their first daughter was born. Ard kept writing.

In November 1950, a son followed. The day he went to bring Eileen and the baby home, he received notice that The Perfect Frame had been accepted for publication.

“We were able to pay the hospital bill with the advance,” Eileen said.

The Perfect Frame introduced what was to be Ard’s best-known detective, Timothy Dane. He would eventually appear in nine more novels. Partial to Seagram’s Seven and an occasional steak at Toot Shor’s if he was in the chips, Dane was a young (thirtyish) New York gumshoe with a rep for honesty.

He was tall, and knew how to handle himself. Some women find the ex-Marine “handsome as hell,” and he certainly seemed to know his way around the Big Apple hotspots of the time. No, Ard didn’t reinvent the wheel. His crime fiction was very much of its time: crooked cops, corrupt politicians, treacherous women, and murderous thugs pitted against a big-shouldered detective with a smart mouth and a Colt .45.

But Dane did have a gimmick, of sorts. It was decency. His appeal lay in the fact that deep down, he was just an average guy trying to do his job the best way he could—while holding on to his integrity if possible. A nice change of pace, considering that his rivals on the paperback racks were such scenery chewers as Mike Hammer and Shell Scott. Sure, Dane carried a .45, and wasn’t afraid to use it, but he showed a compassion and sensitivity rare for the time, recalling Ross Macdonald’s later Lew Archer novels, or perhaps Thomas B. Dewey’s Mac, who were both contemporaries of his. But Ard rarely let his heroes wallow or brood. They displayed a well-earned skepticism more than a bleak, bitter cynicism. Besides, there was no time for moping—someone was bound to come through the door with a gun at any moment. Or the phone would ring, and it would be more trouble on the line. 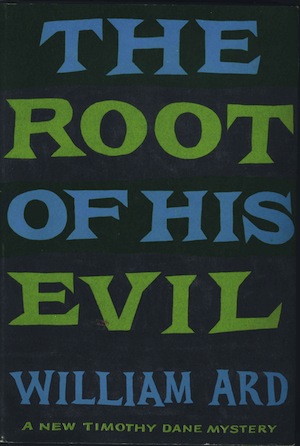 Pumping out books the way he was, it would be silly to suggest everything Ard produced was golden. It wasn’t. But Ard knew how to tell a story, and he knew how to keep things moving. His books were tight and taut; lean but rarely mean blasts of action and character. He was able to create characters that seemed real, and to make readers care about what happened to them.

The young family moved to Florida in 1953. Slowly but surely he was building a solid rep. Anthony Boucher was an early supporter, praising Ard, citing him as “just about unmatched for driving story-movement and acute economy,” and by 1958, his publisher was touting him as “one of America’s most successful mystery and suspense writers.”

The good news is that the collectors haven’t really latched onto Ard yet, so finding decently priced new copies shouldn’t be a problem. Do yourself a favor—next time you see one in a used book store or a yard sale or a flea market, pick one up.

Read it, enjoy. And think about what might have been.

In March 2011, Ramble House published Perfect .38, the first volume of an ambitious project to bring back all of William Ard’s hardboiled mysteries. It collects two of the earliest Timothy Dane novels, The Perfect Frame and .38. Two more volumes, Two Kinds of Bad and Calling Lou Largo!, have since been released.