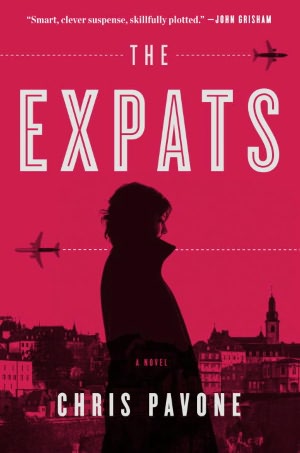 Pavone’s accomplished debut tells the story of ex-CIA agent Kate Moore, who, after taking a lesser role in the agency after getting married, leaves the organization entirely after her husband Dexter, a security consultant, lands a job advising a private bank headquartered in Luxembourg. But Kate has a sneaking suspicion that she’s not entirely through with her past life, a time when she regularly made life or death decisions affecting US national security. Instinctively on the alert for danger, her paranoia increases when another expat couple, who may or may not be government agents, befriend the Moores. It also doesn’t help that her formerly communicative husband has suddenly become secretive about his activities, constantly leaving her alone with their two young sons to travel across Europe on business.

The Expats is highly entertaining, reminiscent of the television show Alias at its peak, as a highly trained operative simultaneously deals with the extraordinary and the mundane. Pavone doles out surprises with almost alarming frequency, all without losing credibility, keeping his audience in suspense, as they root for his winning heroine, who, to her chagrin, learns she is not the only one in her circle that’s harboring secrets. He also renders the entire expat experience accurately, capturing both its exciting and more humbling aspects. That in depth knowledge, evident on every page, grounds the book in reality, allowing readers to more easily accept the novel’s more outré occurrences.

An ex-CIA operative turned expat mom in Luxembourg deals with both the day-to-day and the deadly.