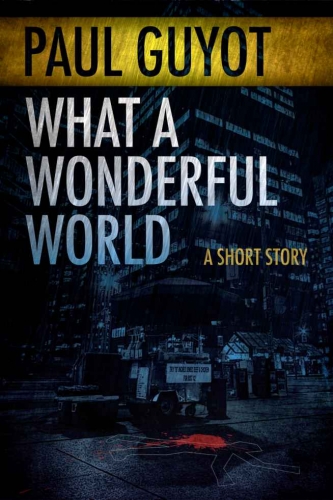 The ebook phenomenon has allowed many authors to republish their back lists, those novels out of print and even redo some work.

It also allows those authors trying to build up a fan base to be "discovered."

Or rather, take his short story What a Wonderful World now available on Kindle.

What a Wonderful World is about a St. Louis cop obsessed with the death of a young woman who sold hot dogs. The short story originally appeared in the Mystery Writers of America compilation Blue Religion edited by Michael Connelly.

So who's Paul Guyot?

Guyot is a television producer and script writer who also has been writing some well-received crime short stories.

When I reviewed Blue Religion, Guyot's offering was one I made of point of mentioning.

Guyot's story stood out for me and I want to point out that he was in good company as the other authors in Blue Religion included T. Jefferson Parker, Alafair Burke, John Harvey, James O. Born, Paula Woods, Leslie Glass, Laurie King, the late Edward Hoch, Peter Robinson, and Greg Rucka.

Currently, Guyot is working on more short stories and a novel.

And Guyot's day job is still in television. He is a writer and producer of the TNT heist series Leverage, one of my husband's favorites. He also spent three years writing and producing the CBS drama Judging Amy.