Books
Dreams of the Dead 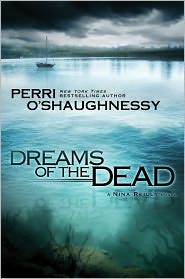 The two sisters writing as Peri O’Shaughnessy handle the fine details of high finance and legal procedure adroitly, without sacrificing suspense, in this novel featuring plucky lawyer protagonist Nina Reilly. Nina is that rarest of animals, a lovable lawyer, depicted as a woman of humor, brains, determination and warmth. (Though why must she seek empowerment by wearing lacy undergarments to court?) She has a handy secretary named Sandy to sweat the details like finding a decent set of matching office furniture. Their banter is priceless.

The plot is a convoluted hotbed of family dysfunction, backbiting schemes, legal maneuvering and personal problems, all set against the glorious backdrop of the mountain resort area of Lake Tahoe and it goes a little something like this: Philip Strong is trying to sell a ski resort in Tahoe, but his no good son, Jim Strong (and former client of Nina’s), files an affidavit (from Brazil, no less), demanding his share of the sale. Nina, the lawyer on the sale, knows the affidavit is a fake, but can’t explain why she suspects it is without betraying some of her own secrets. You see, Jim is a dead man—or, at least, a man who’s supposed to be dead—and Nina, or rather her friend, lover, and protector Paul van Wagoner, made him disappear after Jim Strong killed Nina’s husband and threatened Nina and her son, Bob, years before. Further, there’s a mad killer on the loose who’s killed two women who work at a local casino. Is the killer the hunky investigator hired to verify Strong’s affidavit?

The story has more twists and turns than a Sierra Nevada trail and will keep you guessing up until the end which comes at you so fast and furious, it might merit the warning: steep incline ahead.