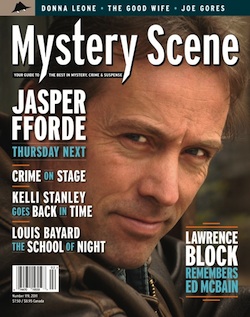 Jasper Fforde and Thursday Next

How The Good Wife Became One of TV’s Best Shows

Is it the hot lawyers and office intrigue? The down-and-dirty Chicago politics? The infidelity-fueled domestic drama?
by Matt Zoller Seitz

Louis Bayard, The School of Night

A secretive society of intellectuals in Elizabethan England is at the center of Bayard’s literary-themed novel.
by Art Taylor

Spotlight on Crime: Mysteries in the Theater

The crime rate is booming in regional theater.
by Wm. F. Hirschman

This Edgar-winner has crime plays, poetry, lyrics, opera librettos, comics and short stories to his credit.
by Wm. F. Hirschman

Writing under his own name or as Ed McBain, Hunter’s imagination and love of writing never flagged throughout his long career.
by Lawrence Block

A tribute to one of the leading exponents of Dashiell Hammett and the creator of the DKA novels.
by Kevin Burton Smith

Birds of a Feather Quiz

Where the Ghost Walks
by Jo A. Hiestand