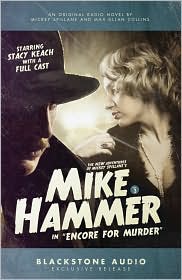 “It’s still ‘dames’ and ‘broads’ with you. That’s what makes you so loveable, Mike.” That’s how vicious gossip columnist Liz Barrett sums up Mike Hammer at the start of this entertaining reminder of how much fun radio drama once was. Barrett’s tone is sarcastic, but her comment is on target.

The mighty Mike’s approach to love and life and death is still pretty much the same as it was in the unenlightened forties. But to those who love him, that’s a good thing. This yarn, adapted by Collins from an outline by Spillane, finds the hardest of hardboiled sleuths mixing it up with Broadway theater phonies and sadistic hoods while body-guarding actress Rita Vance. She’s an old flame of Mike’s who’s returning from retirement after the death of her husband to star in a new musical.

Rather than a Hammer novel, the production resembles a particularly well-written three-part episode from the private eye’s primary TV incarnation. That’s not merely because of Stacy Keach’s appearance or the effective use of the series’ theme, Earl Hagen’s “Harlem Nocturne” (played here by Keach). A couple of the show’s regulars—the all-knowing Ozzie the Answer and Maja, the malaprop-dropping yoga instructor—are on hand, along with Mike’s secretary-turned-partner Velda and his best pal Pat Chambers the NYPD. Expect a lot of action, snappy patter, much of it gleefully non-PC, and several nice plot touches, including a clever method for cleaning dirty money, all smoothly presented by a full cast (including Collins).

“It’s still ‘dames’ and ‘broads’ with you. That’s what makes you so loveable, Mike.”