“When in doubt, cook something and eat it.”

In The Ectoplasmic Man, Harry Houdini joins forces with Holmes and Watson is given the chance to play stooge to a genius magician as well as a genius detective. And that's only one of his new adventures....

For reasons related more to fear of litigation by the Arthur Conan Doyle estate than any lack of irregular enthusiasm, novel-length Sherlock Holmes pastiches were rare indeed before the 1970s. H.F. Heard’s A Taste for Honey (1941) was the pioneer—the beekeeping sleuth in this novel and two sequels was known as Mr. Mycroft, but any knowledgeable reader knew it was Sherlock and not his brother. Ellery Queen’s A Study in Terror (1966), probably the first in which the Baker Street sleuth took on Jack the Ripper, was the novelization of a movie. Not until Nicholas Meyer’s bestseller The Seven-Per-Cent Solution (1974) did the floodgates open. Since then there have been scores of ersatz Holmes novels. Some of them have been excellent; others have only the authors’ devotion and enthusiasm to recommend them. They take many different forms, some of them shifting the central role to another character or reshuffling canonical details in shocking ways. I prefer those that stick closest to the original pattern: told in the first person by Watson throughout, keeping to a length not much greater than Conan Doyle’s own novels, and not distorting the characters as they appear in the original stories.

Eventually some industrious Sherlockian will read all these varied offerings and produce a critical volume advising which to seek out and which to avoid. (I’ve even thought of attempting this myself but quickly came to my senses.) Until that comprehensive guide comes to pass, we have The Further Adventures of Sherlock Holmes, a new reprint series from the British publisher Titan Books, intended to single out some of the better pastiches. Their first set of four selections, distributed in the US at $9.95 per trade paper volume, illustrates some of the varied approaches taken to pastiche writing. 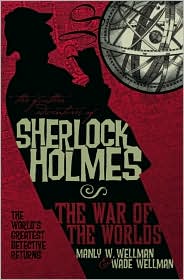 Some writers involve Holmes with other fictional characters from outside the canon or put the Baker Street sleuth in fantastical or science fictional situations. Both these approaches are used in the earliest and least typical book chosen for reprint, Sherlock Holmes: War of the Worlds (1975) by the father-son team of Manly Wade Wellman and Wade Wellman. It inserts both Holmes and Doyle’s science-fiction character Professor Challenger into H.G. Wells’ famous Martian invasion scenario. Some of the parts were originally published separately in The Magazine of Fantasy and Science Fiction, and the very enjoyable volume is less a novel than a set of five linked short stories, the first three narrated by Challenger’s own Watson figure, journalist Edward Malone, the final two by Watson himself.

Other pastichers follow the lead of Nicholas Meyer in bringing real historical personages into the mix. In Daniel Stashower’s The Ectoplasmic Man (1985), set in 1910, Harry Houdini has brought his magic act to London and successfully escaped from a Scotland Yard jail cell as part of his publicity campaign. His feats are so amazing, many think he has supernatural powers. Lestrade, suspecting Houdini of a crime he initially refuses to specify, entreats Holmes to meet and observe the young American entertainer. The crime in question proves to be the theft of scandalous documents from a vault at a government residence where Houdini attended a party for the Prince of Wales, soon to be George V. The detective work and the characterization of Houdini (whom Stashower would feature in at least three subsequent mysteries) are outstanding, along with an exciting aerial action scene reminiscent of one of Houdini’s silent movies. Watson is given the chance to play stooge to a genius magician as well as a genius detective. This novel is the best of the four reprints, as well as the truest to the original stories. 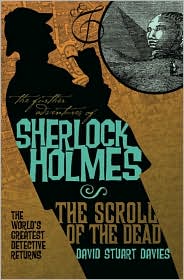 The Scroll of the Dead (1998) by David Stuart Davies begins with Holmes attending a séance conducted by Mr. Uriah Hawkshaw, a charlatan who has been deceiving a member of Mycroft’s staff whose son died in a boating accident. In the course of exposing Hawkshaw, Holmes meets the aesthete dandy Sebastian Melmoth (once a pseudonym of Oscar Wilde), a sinister researcher into the phenomenon of death. In 1896, Holmes again encounters Melmoth in the course of investigating the theft of an Egyptian scroll from the British Museum. The MacGuffin here represents nothing less than the secret of immortality. This is another well-made and well-told tale, most of it in traditional Watsonian style, but as the denouement approaches, the cinematic cross-cutting between first person and third-person omniscient narrative breaks the mood somewhat and probably ought to have been resisted. All the drama and all the plot points could have been achieved just as well through Watson’s narrative.

The other Davies title in the group, The Veiled Detective (2004), is also effectively written, though it belongs to that group of pastiches that turn the whole saga on its head, changing the nature of the characters and their relationships as we’ve come to know them. Admittedly, this sort of thing goes back at least to The Seven-Per-Cent Solution, but Davies’ revisionist biography is even more extreme than Meyer’s. The story begins in 1880, first in Afghanistan with the third-person account of Dr. John Walker (sic), a dispirited army surgeon, then back in London where young Sherlock Holmes is already helping out Lestrade and Gregson, and Professor Moriarty, aided by Colonel Moran, is pulling the criminal strings. Davies gives Watson a whole new dishonorable back story and alters our understanding of virtually every character in some way, with no satirical intent apparent. Holmes’ career from A Study in Scarlet through “The Final Problem” is summarized in light of the reshuffled relationships, often with direct quotes and restated storylines from the original stories. Much as I admire the skill and inventiveness of the author, I would much prefer a straightforward case.

Three out of four isn’t a bad average. The Titan series, which has gone on to publish several more in this series, deserves the Sherlockian reader’s support.

"Emerson was clearly in one of his masterful moods. I always allow him to enjoy them unless I feel it is necessary to set him straight."
—Amelia Peabody Emerson, The Hippopotamus Pool, 1996, by Elizabeth Peters