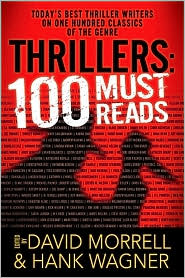 Members of the International Thriller Writers cover key titles in their genre. Thriller is a notoriously flexible (and expandable) term, but Allison Brennan’s compact list of characteristics (“high stakes, something personal at risk, and strong pacing”) will do. Subjects range chronologically from Lee Child on Theseus and the Minotaur (1500 B.C.) to Steve Berry’s celebration of Dan Brown’s The Da Vinci Code (2003), the single exception to the 2000 cutoff date. Each essay includes a summary and appreciation of the book discussed, usually with a biography of the author. Among the contributors are major names in the field, and books covered include classics by Homer, Shakespeare, Defoe, and Dumas; early science fiction by Poe, Verne, and Wells; and horror landmarks like Mary Shelley’s Frankenstein, Bram Stoker’s Dracula, and Robert Louis Stevenson’s Dr. Jekyll and Mr. Hyde.

The selections and the essays are generally excellent, making the book a fine introduction to the range of thrillers. Quibbles over inclusions are inevitable. I was disappointed not to see Manning Coles, Donald Hamilton, Victor Canning, or Charlotte Armstrong. Scott Turow would have been a better choice to represent the legal thriller than John Grisham, who like Spillane is more a commercial phenomenon than an artistic trailblazer. In the “What About Murder?” test kitchens, I tried a couple of the hundred I’d previously missed. Nelson DeMille’s The Charm School (1988) is intelligent and absorbing, a true genre classic, and I’m grateful for the tip; but I can’t imagine why a novel as derivative and definitively dreadful as James Patterson’s Along Came a Spider (1992) was included.

Members of the International Thriller Writers cover favorites of their genre.

"If you've ever read a mystery story you know that a detective never works so hard as when he's on a vacation. He's like a postman who goes for a long walk on his day off."