"The greatest crimes are caused by excess and not by necessity.”
—Politics, Book II, Chapter 7 by Aristotle circa 300 B.C.; English translation, Aristotle’s Politics, 1885, by Benjamin Jowett 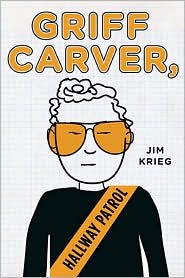 Jim Krieg’s Griff Carver, Hallway Patrol skewers the tough cop subgenre by bringing it to the suburbs. Rampart Middle School may have the reputation of being the safest school in town, but Griff Carver knows better. He’s been on the job since kindergarten, and he sees beneath the shiny surface to the slimy stuff below, a world where gangs rule and everything is for sale, including test answers, term papers, and fake bathroom passes. Characters include: Griff, the hall-wise cop, who enforces the law on his own terms; the head of the Hallway Patrol, caught between the principal’s office and his own sense of justice; the naive, by-the-book partner, who learns the truth the hard way; the savvy reporter, out to get a story any way she can; and the forensics geeks of the Omicron Science Club, who provide the vital evidence that nails the perps. Alas, even as in the adult world, criminals do not always pay for their misdeeds, but fear not! With Griff Carver on patrol, it’s only a matter of time before justice will be served. Young readers may not get the parody aspects of this revelation of urban evil, but adults will relish the echoes of Wambaugh and McBain as the sixth-grade Serpico fights corruption and nails his man.

A winning grade school Serpico serving up justice in the halls of middle school.