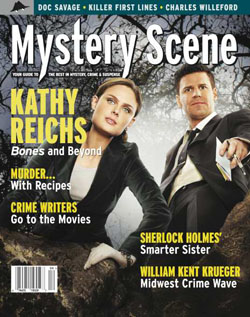 Kathy Reichs: Bones and Beyond

Her bestselling novels about a forensic anthropologist, Temperance Brennan, and the hit TV series they inspired are only the beginning for this powerhouse.
by Oline H. Cogdill

Long known as a “writer’s writer,” the word is spreading about this author’s richly characterized, densely plotted,and emotionally resonant novels.
by Lynn Kaczmarek

Murder on the Menu

As the creator of an iconic hero, Lester Dent was hugely successful, prolific, influential—and virtually unknown.
by Michael Mallory

The Write Stuff: Authors in Crime

The literary life is thrilling, dangerous, even deadly—well, at least it is in these films.
by Art Taylor

There’s a strong case to be made that Enola is the best detective in the Holmes family.
by Cheryl Solimini

A writer as idiosyncratic as his characters.
by Lawrence Block

Bowling for Rhinos
by Betty Webb

Back Home
by Michael W. Sherer

Boston, Inside Out
by Rosemary Herbert