"The joy of being single is you always get to have your own way."

Short Stories
An Elderly Lady Is Up to No Good 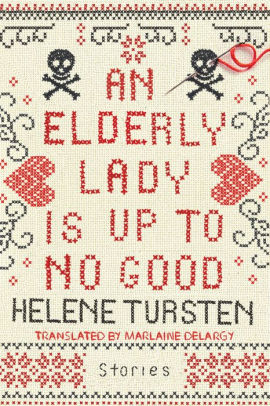 An Elderly Lady Is Up to No Good, by Swedish author Helene Tursten, is a criminally brilliant, if too brief, collection of five tales about the murderous adventures of Maude. Maude is a retired school teacher who lives, rent free and alone, in the same apartment where she was raised. From the outside, Maude appears to be nothing more than an independent 88-year-old woman—she enjoys traveling alone,  watching television, and  Alfred Hitchcock’s The  Birds is her favorite  film—but when her solitary and quiet life is  threatened by noise, or  someone is after her lovely  apartment, her response  is always murder. It’s a  vocation Maude is very  good at, since her murders  tend to be mistaken for  accidents, and if there is any suspicion about the death, she is a master at playing the doddering fool—confused, hard of hearing, slow of foot.

“An Elderly Lady Has Accommodation Problems” has Maude’s new neighbor, a minor celebrity and vulgar artist, keen on Maude’s large apartment. “An Elderly Lady Seeks Peace at Christmastime,” is an ode to noisy neighbors and Maude’s crafty plan for a quiet Christmas. The final two stories are versions of the same murder. “The Antique Dealer’s Death” is told from the perspective of Maude’s neighbor. The other half of the tale, “An Elderly Lady Is Faced With a Difficult Dilemma,” is all Maude, detailing the old woman’s planning and care when it’s time for someone to die. Both tales feature Tursten’s series character Inspector Irene Huss in minor roles.