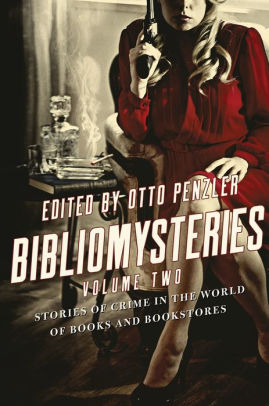 <p>Bibliomysteries Volume Two, edited by Otto Penzler, is as good as the first entry in the series and perhaps even better. A handful of the 15 tales are outstanding, two were nominated for Edgar Awards, and every story is involving and entertaining. The tales are novella-length, with one, “Citadel” by Stephen Hunter, clocking in at very close to that of a short novel. Each story has a bookstore or a book as the central element to the mystery, but that is where their commonality ends because the style, setting, and story-types range broadly, from traditional to hard-boiled to thriller to horror, and historical to contemporary.

James Grady’s superior thriller “Condor in the Stacks” brings an aging Condor from retirement—or more aptly, sees him released from the institution where he had been stashed away for decades—with a new name and a simple job at the Library of Congress. But nothing is simple with Condor, and when he begins noticing inconsistencies while checking old books for classified information, he is forced to decide whether he keeps his job and freedom or follows the leads. “The Compendium of Srem” by F. Paul Wilson is the oddest and one of the most entertaining stories included. When, during the Spanish Inquisition, a book with a heretical message and magical abilities—the contents are always in the language of the reader and the book cannot be destroyed by any known means—is brought to the Grand Inquisitor, Tomás de Torquemada, he is perplexed and troubled by the book’s power and fearful of its origins. Megan Abbott’s Edgar-nominated “The Little Men” is an ironic noirish gem set in 1950s Hollywood featuring a haunted apartment bungalow, suicide, and betrayal. “Every Seven Years,” also nominated for an Edgar, by Scottish writer Denise Mina is a perfectly crafted suburban noir drawn from an outsider’s viewpoint with murder, secrets, and insanity.

Included in the anthology are worthwhile stories from Joyce Carol Oates, where she inserts the editor of the volume—Otto Penzler—into the story under the name Aaron Neuhaus, R.L. Stine, Lyndsay Faye, Bradford Morrow, Thomas Perry, and many others. I’m already thinking ahead to what delights may be in store with the third volume of this excellent series.