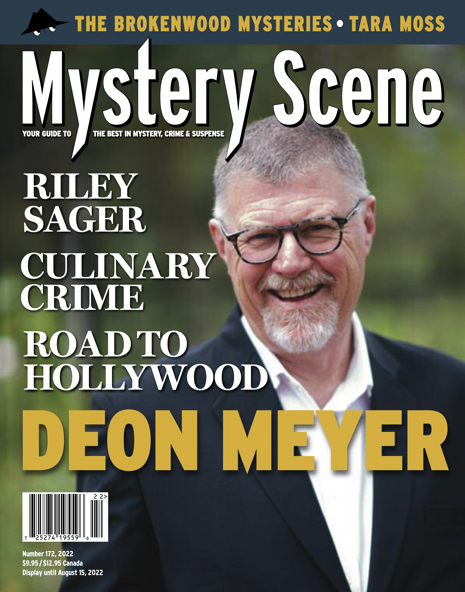 Feeling peckish? In this issue, Oline Cogdill offers a tasting menu of 10 delicious new culinary crime novels. Recently there has been an expansion into different ethnic cuisines that adds extra spice to the reading experience. Don’t miss Oline’s guide to mystery-themed cookbooks on page 30.

Craig Sisterson interviews Deon Meyer, often called the King of South African Crime Writing. When Meyer started out, though, he was on his own. “I think most crime fiction in South Africa would have been banned under Apartheid, unless the cop was, you know, an Apartheid supporter standing in support of the government,” says Meyer. “And I think very few authors wanted to write that kind of thing.” Today, South Africa has a thriving mystery writing community. Don’t miss the list of other South African authors to try on page 17.

Michael Mallory reminds us that Sgt. Joe Friday wasn’t Jack Webb’s only foray into crime. Earlier in his career, Webb starred as the world-weary and ethically-challenged Pat Novak, a struggling underdog in post-WWII San Francisco. Pat Novak, for Hire is still regarded highly by old-time radio fans and is available online and on CD.

Have you ever wondered why your favorite book hasn’t made it to the screen? Or why, if it did, the result bears little resemblance to the book? Hank Phillippi Ryan has and she’s assembled a panel of authors, screenwriters, agents, and showrunners to give us some insights into the Hollywood process.

With her two WWII-era novels, Tara Moss has found her focus. “I’m interested in the stories of regular people who had to live in complete turmoil and having their lives uprooted entirely and trying to survive,” she says. “They’re not Churchill, they’re not Hitler, they’re not making the decisions. They’re at the mercy of those who are—like most people were—and I find those stories just extraordinary.” Craig Sisterson talks to the author in this issue.

You’re not supposed to judge a book by its cover but what about by its author’s name? The pseudonymous Riley Sager says a new nom de plume helped give him a new literary start. His novels were well-reviewed from the very first, but his early ones failed to find an audience. Poor sales begat poor sales until he changed his name and voilà—sales began to match the critical acclaim. John B. Valeri talks to Sager in this issue.

Author Misha Popp says, “I didn’t sit down and specifically say, ‘I’m going to write a mystery.’ It was more like, ‘I’m going to write a book about a vigilante baker who kills bad men with good pies,’ and went from there.” John B. Valeri talks with this first-time novelist, whose debut Magic, Lies, and Deadly Pies, is a darker shade of cozy.

Craig Sisterson says, “The Brokenwood Mysteries is a sort of blend of a rural Columbo with an ensemble Murder, She Wrote, seasoned with a dash of Twin Peaks, and then made more unique by its Kiwi settings, humor, and sensibilities.” Brokenwood is one of New Zealand’s most successful TV exports. Brian and I gave it a try and enjoyed it very much!