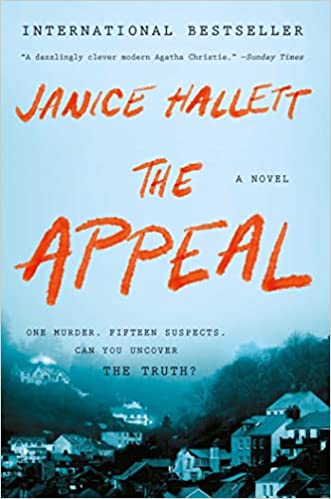 Janice Hallett’s unusual and compelling debut brings a modern twist to the novel in letters. Knowing only that one person is dead and another may be wrongfully incarcerated, Femi and Charlotte, junior associates at a law firm, are tasked with reviewing a mountain of evidence for an unnamed client’s appeal. Since the senior partner wants a fresh, unbiased analysis, they’re given no context or background. The two plunge into reading a huge volume of emails and texts sent among more than a dozen people between late March and mid-July 2018, along with a smattering of news clippings and other documents. The novel is constructed entirely through these written materials, providing shifting points of view with no independent narrator.

The multilayered story centers on the Fairway Players, a long-running amateur theater group run by Martin and Helen Hayward, pillars of the community and owners of The Grange, a country club in the English town of Lockwood. Helen, the family matriarch, is the star of every show; Martin produces and directs; their adult children, James and Paige, are also key members of the troupe.

The Players are just beginning a new production, and their stagestruck newest member, Isabel Beck, enthusiastically recruits her fellow nurses Sam and Kel to audition. The couple has recently returned from eight years volunteering for Doctors Without Borders in the Central African Republic and are eager to get to know their new neighbors.

Just as the production gets underway, Martin Hayward makes a shocking announcement: his two-year-old granddaughter Poppy has been diagnosed with a rare brain cancer. He turns directing responsibilities over to James, while Helen inexplicably carries on in her leading role. The Haywards are desperate for Poppy to get an experimental new drug treatment from the United States, but its cost is astronomical. Stunned by the news of Poppy’s illness, the entire community rallies to help raise the funds and ensure that the show will go on—no matter what. But not everything (or everyone) is what it seems, many of the key players have hidden agendas, and the production ends disastrously.

Hallett brilliantly draws lifelike characters and the complicated relationships among them using only their own words—at times just a few brief lines. Instead of offering a known crime and a detective who solves it, the novel’s unconventional format makes the reader the detective along with Femi and Charlotte. The mystery isn’t just whodunit—it’s what did they do, to whom, and why? The Appeal is a highly original tour de force that’s almost impossible to put down.