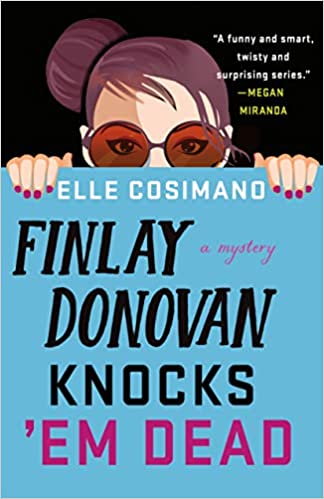 After having been mistaken for a hit woman in the series debut, Finlay Donovan, novelist and single mother, is struggling with writer’s block while attempting to return to the low-level chaos that is her daily life. But there’s one new challenge: Finlay has just learned through the murder-for-hire grapevine that someone may have put a $100,000 hit on her obnoxious ex-husband Steven, who’s been having a run of bad luck since his former fiancé was arrested.

The idea of getting rid of him is tempting, even though Finlay’s not a real killer—but he loves the children, they love him, and she’d never do anything that might hurt them. Unfortunately, he brushes off Finlay’s attempts to warn him and believes her reluctance to leave the children with him is a mere ploy in their ongoing custody and visitation battle.

She and her live-in babysitter/accountant Vero (who loathes Steven) have to shut down the hit and ensure it’s safe for the kids to spend time with him again. But how? All they have to go on are coded messages in an online forum for kvetchy moms.

Meanwhile, Finley’s agent Sylvia is breathing down her neck about imminent deadlines for her next book, her mother’s nagging her about dating, her casual-but-steamy relationship with a young law student is getting complicated, her van is on its last legs, and Nick, the unbelievably sexy cop from her previous adventure, shows up at Kindergarten career day.

The result is a madcap, murder-themed, screwball comedy where Finlay and Vero land themselves in an escalating series of darkly comic situations—think I Love Lucy if Lucy and Ethel stole cars, sneaked into jail to meet with Russian mobsters, and hid body parts in their major appliances.

Finlay’s voice is warm and vivid, full of wry humor with a touch of snark. The supporting characters, from a teenage hacker to the hapless Steven, are charming and well-drawn, each in turn revealing their own surprising secrets. Occasional implausibilities and Finlay’s obtuseness to Vero’s odd behavior detract little from the nonstop action, which veers from loose teeth and toilet training to arson and mayhem in the blink of an eye.