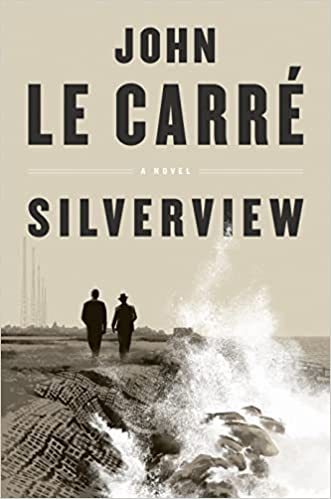 Silverview, John le Carré’s seemingly elegiac final novel—finished after the author’s passing by his son, writer Nick Harkaway— opens on a rainy London morning with the delivery of a letter to London spy chief Stewart Proctor. The letter warns Proctor of a dangerous intelligence leak, prompting him to open an investigation, which ultimately leads to a small coastal town.

In that small town is a struggling bookstore owned by Julian Lawndsley, who gave up his fast-paced life in London to buy and run it—though he’s been lately questioning his decision to do so. But as luck would have it, Julian meets the charismatic Edward Avon, an old school mate of Julian’s late father, and the two men strike up a kind of friendship while trading stories of Julian’s dad and hitting upon an idea to expand Julian’s business. But it’s not long before Julian begins to question Edward’s interest in their partnership. A strange London meeting with a mysterious woman while on an errand for Edward to deliver a message, and a visit to Edward’s home, Silverview, does little to allay Julian’s growing suspicions.

Meanwhile, Proctor has to convince his superiors that the allegations of a traitor are true and then prove just who has been divulging Britain’s secrets to those who would do the country harm.

Silverview skillfully builds each of the separate plot lines until they converge into one central narrative. As is the case in many a spy novel, Stewart Proctor, Julian Lawndsley, and Edward Avon are each a cipher. Readers don’t know what they are all about until each successive layer of the storytelling onion is peeled away to reveal more about each character.

Le Carré’s limber use of the breadth and depth of the English language (I had stop to look up a couple of words) in the early parts of Silverview had me wondering at times if the story was ever going to get around to the point le Carré was trying to make about the world of espionage and the people who actively or unwittingly become involved in protecting the secrets of a nation; but the tension level ratchets up once the revelation of the spy’s identity is revealed. As the hunt to bring them down brings the book to a stunning conclusion, readers will find themselves breathlessly turning pages to find out just what happens next.

It’s been nearly two years since John le Carré died, but with Silverview he’s given readers another adept exploration of what it means to be part of “the secret world” and amply demonstrates one final time that he is the incontrovertible master of literary spy fiction.