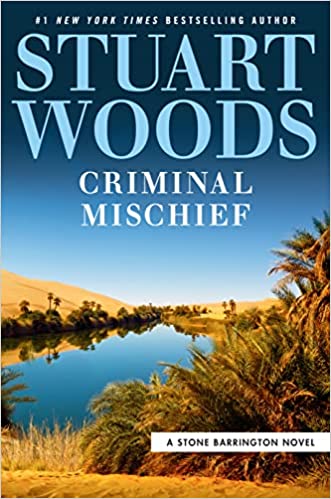 In the new Stone Barrington thriller by Stuart Woods, the main character is simply looking to live his life, but the universe has other plans.

Life as a highly paid senior partner in a law firm has its perks and Barrington is certainly taking advantage of them. But a chance meeting with a woman in a bar ends up being more than Stone bargained for when an expensive item is stolen from his home. The item is quickly returned, as it was just a ploy to get Stone’s attention. It seems she’s been the victim of Viktor Zanian, a Bernie Madoff-type finance guy who has fleeced any number of people out of millions, if not billions, of dollars, and she needs Stone’s help. Soon after Barrington meets another woman with the same story, Zanian ends up disappearing, leaving any number of victims in the lurch.

With a huge reward posted for locating and bringing Zanian to justice, Barrington teams with his police commissioner friend Dino Bacchetti, the federal government, and one of Zanian’s victims to track the crook down. On the hunt for the reward, Barrington chases Zanian halfway around the world, avoiding assassins and some of the United States’ biggest enemies on the tail of a desperate man with nothing to lose.

For longtime readers of the Stone Barrington series, everything—the action, the fine dining, the bedding of attractive women—are surely all hallmarks of the books. But as a new reader, I found myself enjoying the short chapters and rapid fire dialogue. Those aspects reminded me of Robert B. Parker Spenser books where everything is geared toward propelling the plot forward and not dwelling too long on any one scene. The seemingly breathless and breakneck pacing keeps readers guessing as to what might happen next.

Criminal Mischief, the 60th book in the long-running Stone Barrington series, continues to pack a lot of fun at each twist and turn in the plot in this breathlessly paced story.