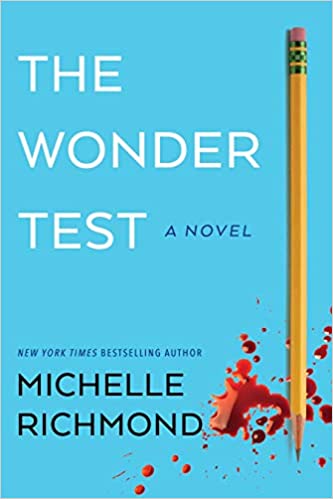 Grief- and guilt-stricken FBI agent Lina Connerly is taking a break to devote more time to her teenage son, Rory, after losing her father and husband in quick succession, then making a serious error in her counterintelligence work. They move from New York City to the small town in Silicon Valley where Lina grew up, hoping to escape painful memories while she settles her father’s estate.

Idyllic on the surface, Greenfield, California, has changed radically since Lina left more than 20 years ago. Property values are stratospheric, thanks to its high school consistently garnering the top scores nationwide on a high-stakes standardized exam called The Wonder Test that all students must take in the tenth grade. The school takes “teaching to the test” to a whole new level with pep rallies, a curriculum focused entirely on test prep, and special tutoring sessions for the weaker students.

Aggressive real estate agents circle Lina like sharks, knowing she will soon sell her late father’s house. Lina feels decidedly out of place among the wealthy, trendy moms, while Rory acclimates easily, befriending his classmate Caroline, the charming daughter of French diplomats. Then Officer Kyle Randall, a local rookie police officer, asks Lina’s advice on a troubling open case, a high school student who disappeared for 11 days the previous year, then reappeared, naked, shivering, and traumatized, on the beach at Half Moon Bay.

It’s puzzlingly obvious that the Greenfield PD has little interest in solving a crime that in most jurisdictions would call for all hands on deck. Meanwhile, Lina can’t quite let go of her past intelligence work. When another child goes missing, she must decide just how far she is willing to go outside of official channels.