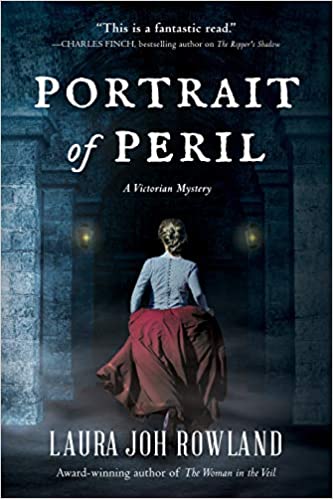 Just as crime reporter and photographer Sarah Bain nervously—and joyfully— exchanges wedding vows with the handsome love of her life, police detective Thomas Barrett, a murder victim is discovered in the crypt of the church. In London in 1890, spiritualism is all the rage and “spirit photographs” command high prices.

There are rumors that the church is haunted; the victim, an old photography acquaintance of Sarah’s, was stabbed while attempting to capture images of ghosts in the crypt. While some believe the killer was an actual ghost, Sarah is skeptical and feels compelled to investigate, with the help of Barrett and her best friends (and flatmates) Mick and Hugh.

Soon they are drawn into a world of possibly genuine and unquestionably phony psychics, true believers, cynical debunkers, and distraught victims of fraud. Many of them have motives and few have solid alibis. Meanwhile, Sarah and her half-sister, Sally, are secretly delving into their family’s difficult past in the hope of clearing their fugitive father of suspicion in a decades-old, unsolved murder. Their investigations bring up disturbing memories and unresolved emotions, raising more questions than they answer.

Sarah’s new mother-in-law is appalled by her unconventional lifestyle, the newlyweds find themselves unexpectedly bickering, and Barrett’s boss, Inspector Reid, still harbors a nasty grudge against them from a past case. Making matters even worse, both Mick and Hugh find themselves caught up in different kinds of serious trouble.

Since this is the fifth installment in the series, there’s a good deal of backstory packed into the first two chapters, but it doesn’t slow down the action. From the dramatic opening scene to the equally dramatic denouement, the story takes one surprising turn after another as Sarah travels to tea parlors, public meetings, middle-class homes, workhouses, hospitals, and pubs, questioning suspects, locating witnesses, and encountering a variety of memorable characters.

The settings and characters are vividly described, the dialog is lifelike, and Sarah’s empathy, tenacity, and grit make her an engaging heroine. A brief epilogue hints at Sarah’s next adventure.