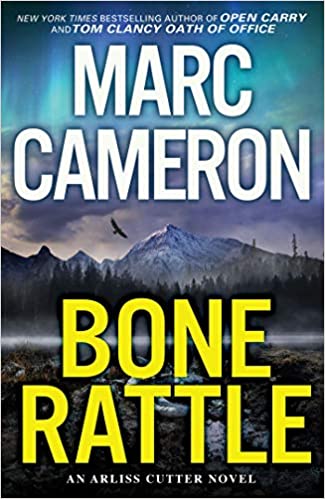 In Marc Cameron’s third Arliss Cutter novel, the titular U.S. Marshal, instead of hunting down fugitives in the harsh and unforgiving Alaskan wilderness, is tasked with guard duty for a sequestered jury. Normally, this would be a pretty tame assignment for Cutter and his deputy, Lola Teariki, but the trial involves a big drug trafficking ring, concerns for the native culture, and unbeknownst to everyone in law enforcement, an Alaskan business magnate.

Things explode rather violently when the attorney prosecuting the case is murdered. Suddenly, Arliss and Lola are tracking down a killer. As they dig into the case, they come across a number of clues that point to a wide-ranging conspiracy and political forces bent on keeping the marshals on the sideline. The search takes them deep into Alaska’s harsh landscape for the witness who can tie it all together.

As a newcomer to the series, I was struck by just how immediately I liked Arliss Cutter. While a dedicated U.S. Marshal with a hard-line outlook on life, he’s not a one-dimensional cardboard cutout. He’s pushed by tragic events in his past, but remains steadfastly loyal to those in both his professional and personal lives while refusing to suffer fools gladly.

Marc Cameron’s use of multiple character viewpoints in the narrative helps give life to not just the story’s heroes, but also to its villains, and those caught in between those two diametrically opposed forces.

Cameron’s descriptions of the Alaskan landscape make you feel like you are there beside his marshals on the hunt for that missing witness, and his real-life service to the U.S. Marshals Service certainly helps lend an air of realism to the story.

Take all these qualities and combine them together (and throw in a couple of delicious sounding recipes), and readers will find themselves riveted to Bone Rattle from start to finish.