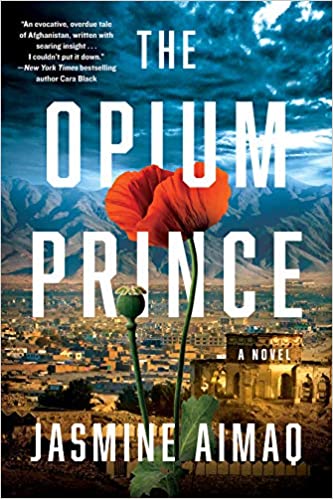 Daniel Sajadi, the privileged son of a wealthy Afghan War hero, heads a US foreign-aid agency dedicated to eradicating the booming opium trade. Traveling with his American wife, Rebecca, for a weekend getaway to celebrate their anniversary—and heal the rifts in their marriage—he hits and kills Telaya, a young nomad girl who suddenly runs in front of his car on a desert road. The repercussions of the accident force Daniel to make a secret bargain with Taj Maleki, a powerful opium khan. Overwhelmed by feelings of guilt, he is faced with increasingly difficult personal and professional choices. As his life and career spiral rapidly out of control, the tenuous political situation escalates into chaotic violence.

Set in Afghanistan in the late 1970s, just before and during the Communist revolution, The Opium Prince is beautifully written, immersing the reader into a complex land where ancient cultural traditions coexist with modern ambitions. It portrays a crucial historical moment in rich detail, bringing nuance to questions of family and destiny, loyalty and betrayal, wealth and poverty, identity and belonging.

Daniel and Taj are difficult to like at first, but their contrasting journeys toward facing uncomfortable truths are deeply affecting. The opening Author’s Note offers the “hope that the stories of Daniel, Telaya, Rebecca, and Taj will leave a lasting impression on you and reveal new facets of the place I once called home.”

Aimaq, who lived in Afghanistan and Europe before settling in the United States, has fulfilled that hope by illuminating the way different perspectives on right and wrong—and the vast gray areas between them—influence moral choices and human relationships.

It’s rare that a novel published on a crime imprint and marketed as a thriller can move the reader to tears, but The Opium Prince is such a book, combining memorable characters, dramatic events, multiple points of view, and well-crafted prose in a fascinating portrait of a land of contradictions at a pivotal time.