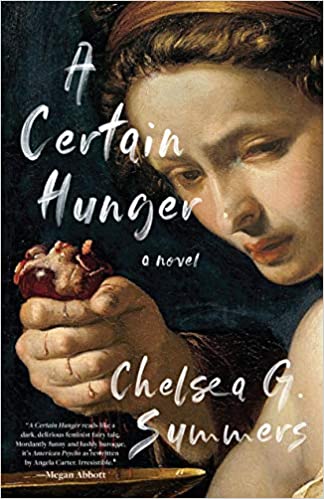 Chelsea G. Summers’ unabashedly feminist, gleefully transgressive debut, A Certain Hunger, is written in the guise of a memoir—specifically, that of 51-year-old James Beard Award-winning food writer Dorothy Daniels, who is now serving life plus 20 years for killing Casimir Bezrukov with an ice pick. Dorothy doesn’t deny her guilt; to the contrary, she brags about it, providing a comprehensive account of her crime. But that’s far from the only subject she tackles here. In fact, it’s not even the only murder to which she admits. With sumptuous prose and a narrative style that’s discursive, darkly funny, and pathologically self-assured, Dorothy examines the history of the Corpse Reviver cocktail, waxes rhapsodic on the topic of duck fat, and reminisces fondly about her childhood, her career, her sex life—and her genesis as a cannibal. Summers cleverly employs a serpentine structure to ramp up suspense and inject mystery. Readers are kept guessing at the depths of Dorothy’s depravity, how and when she got caught, and by whom. What’s more, they’re nagged by the sense that Dorothy is working up to something—some final confession regarding an act she truly regrets. Make no mistake, this isn’t a book for the squeamish or easily offended; Dorothy is a true psychopath with a penchant for elaborate detail and a knack for making one feel less a spectator than a co-conspirator. But those who dare to indulge will be richly rewarded with a mesmerizing tale that shocks and shatters in equal measure.