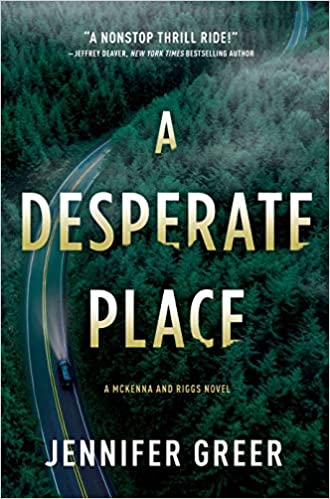 Medford, Oregon wouldn't strike anybody as a potential hotbed of international concern but in the first of Jennifer Greer's McKenna and Riggs series, that's exactly what readers will find themselves drawn into.

Whit McKenna was a hotshot reporter for the L.A. Times, but is now licking her wounds (both literal and figurative) by working for the small-town Medford Daily Chronicle. Meanwhile, medical examiner detective Katie Riggs is dealing with her own set of scars, visible and otherwise. The two women are best friends though their professional careers leave them on opposite sides of the informational divide.

The discovery of a woman's body in the forest brings the world crashing down on the small town when the victim turns out to be a famous actress who lived in the area. Suddenly everyone wants answers and the international press descends upon Medford. The heat turns up on law enforcement when two more bodies turn up in short order. None of the victims seem to have anything in common with each other which leaves both McKenna and Riggs to chase down the truth to find out just why these people were killed and who did it. This leads them down a path towards a confrontation with a killer playing a twisted game that could leave both women as the next targets.

The book is set in the middle of a relentless heat wave. That literal heat combined with the manufactured heat of being under a worldwide magnifying glass serves only to galvanize the otherwise breezy narrative. Whit McKenna is holding things together, partly because she has two daughters to raise, with sheer willpower and more than a little alcohol. Katie Riggs has survived death only to become obsessed by it and is trying to let go and live a little. The detailed descriptions of the life of a small-town journalist ring especially true and there is also a pretty solid supporting cast for the two leads to play off of as the story moves towards its stunning conclusion.

Whit McKenna and Katie Riggs are two strong women in their own right but they are even better when they team up to unmask a killer and stop their murderous game. Take that along with a smooth flowing storytelling style and A Desperate Place is a winning combination that will leave readers eager for more.