Books
Hour of the Assassin 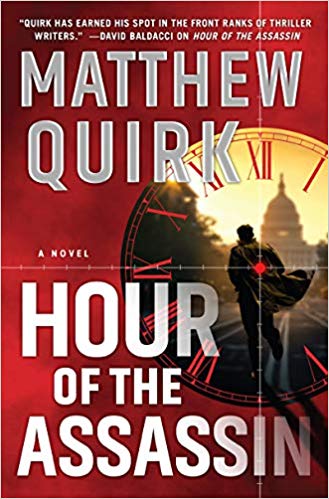 Nick Averose is an assassin...of a sort. A former Secret Service agent turned private sector contractor, Nick tests the security systems and procedures of high-ranking officials in the Washington, DC, area by trying to breach them as a mock killer. It’s a strange job to be sure, but one that serves a good purpose—and he’s one of the best.

But all of Nick’s careful planning goes awry when he’s hired to test the security of a former director of the CIA. After successfully making “the kill,” the night turns to hell when an unknown team of assassins shows up and actually kills the target. Nick escapes the house, but soon discovers he’s been framed for the murder. The people who hired him don’t exist and the proof that shows him to be innocent has disappeared.

Nick soon realizes (with the help of what few allies he has) that he’s up against someone very powerful with connections to DC’s political elite. Forced to risk his life and freedom in a desperate yet relentless search for the truth, through each betrayal and startling revelation, Nick’s hunt reveals the depths some will go to in order to maintain power.

Matthew Quirk’s previous book, The Night Agent, was my favorite book of 2019. Quirk crafts intense plots that crackle with a barely restrained energy. I find the claim that a book is something you can’t put down to be a bit hyperbolic, but Quirk’s highly addictive action thrillers come about as close as one can to making that statement ring true. I found Hour of the Assassin damn hard to put down, and blazed my way through it in less than a day. I can’t think of a better testament than that to the quality of the story and the author’s ability to capture the imagination of readers so completely.

In other words, Matthew Quirk has once again written a story that stands out as one of the best thrillers you will read this year.