"He always has an alibi and one or two to spare." 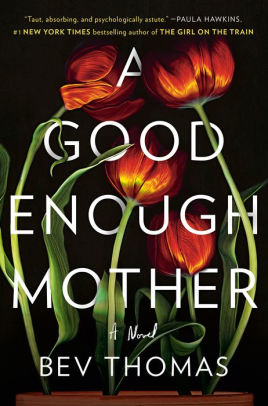 Authored by a former clinical psychologist in Britain’s National Health Service (NHS), A Good Enough Mother is anything but a formulaic murder mystery, although a murder does take place. Beautifully written, it takes on difficult themes, exploring the deeply fraught relationships between patient and therapist, mother and children, husband and wife, brother and sister. Many readers will recognize the title reference to influential psychologist D.W. Winnicott, and the phenomenon of transference between therapist and patient plays a key role.

Ruth Hartland is an experienced and highly skilled psychotherapist who is dedicated to her work as the director of a specialized NHS trauma unit. It’s exhausting, emotionally demanding work, but Ruth is proud of her skill at helping even the most difficult of cases. When she takes on a new patient, an unstable and manipulative young man named Dan Griffin, the victim of a violent assault, she is stunned by his uncanny resemblance to her beloved son, Tom. Tom, who attempted suicide at 16, has been missing for a year and a half—a fact she has kept secret from her professional colleagues. Instead of referring Dan to another therapist, as she well knows she should, Ruth is unable to resist the desire to help him herself. Their weekly sessions stir up turbulent emotions that lead her to violate professional boundaries she would never have crossed with another patient. There are disturbing hints that Dan, who seems obsessed with films that involve suicide, is not exactly what he seems to be. The consequences of their relationship will prove to be catastrophic for Ruth, Dan, and others.

Narrated in Ruth’s voice, A Good Enough Mother weaves Ruth’s sessions with Dan and with her own supervising therapist together with her memories of mothering Tom, an anxious and insecure boy who never seemed to fit in. Small moments, artfully drawn, highlight the ways those we love can be both endearing and infuriating—often at the same time. Ruth’s struggle to come to terms with guilt and loss is a memorable journey toward understanding and ultimately, acceptance. This rich debut novel offers a well-drawn and compelling portrayal of the fragility of families, the complexities of human relationships, and the limits of self-awareness, all in an atmosphere of steadily mounting suspense.