"Mediocrity knows nothing higher than itself; but talent instantly recognizes genius."

—Sherlock Holmes, The Valley of Fear, 1914, by Arthur Conan Doyle

Books
Confessions of an Innocent Man 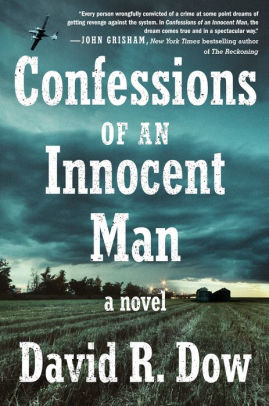 If it is possible to both like a book and be completely put off by it at the same time, then that might be the best summation of what it was like to read David R. Dow’s debut novel, Confessions of an Innocent Man.

Split into two halves and told from the viewpoint of Rafael Zhettah, the first part tells the story of Rafael as the chef and owner of a small-but-successful Texas restaurant. He’s also a pilot and relishes the freedom that his life allows him. When he meets Tieresse, he finds his life changed as the two soon fall in love. The fact that she is a billionaire seems to have no bearing on the couple’s love for each other, and soon they are married. But life takes a swift and tragic turn when Tieresse is found brutally murdered. Making matters worse for Rafael is that he is eventually charged, tried, and found guilty of the murder. He’s sentenced to death, and anyone who’s ever read a story about death row in Texas knows it is just a matter of time before the sentence is carried out.

Rafael insists he’s innocent and keeps a diary of his time on The Row. It details day-to-day life and his reactions to his jailers, his fellow inmates, and the various dehumanizing traits of living life overshadowed by a death sentence.

This is not the end of the story though. When circumstances unfold that allow Rafael and his lawyers to prove his innocence, he’s soon a free man. This is not really much of a spoiler, as it sets the stage for the second half of the story.

And that is where the story, for me, slides off the rails. Rafael’s vengeful actions ended up diluting any sense of sympathetic outrage I had over the miscarriage of justice he endured. I was less than enthralled by the way the story’s end cheated the reader out of a real sense of justice for any of the characters in the book.

Confessions of an Innocent Man is a relentlessly gripping and intensely well-told tale, but no matter where you happen to fall on the death penalty issue, the author seems to be expecting readers to blithely forget that old axiom most learn as children...that two wrongs don’t make a right.

"Why is nothing ever simple? Why don't things have a beginning, a middle, then an end like a date with a Catholic girl?"
—Vic Daniel, Down in the Valley, 1989, by David M. Pierce