"Life is the process of finding out, too late, everything that should have been obvious to you at the time." 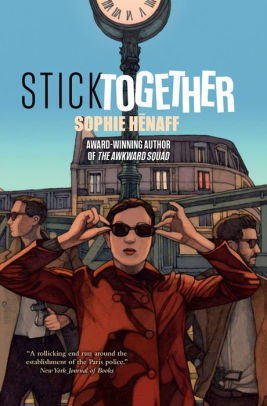 Eccentricities abound on Paris police Commissaire Anne Capestan’s team of “undesirables.” They play snooker in the office, suffer from assorted personal tragedies and comical delusions, and bring their pets to work. One member, a punch-drunk computer wiz, keeps a Post-It on his monitor reminding himself to “delete illegal hacks.” But despite their eccentricities, under Capestan’s tactful-but-firm leadership, their unorthodox methods are effective and their teamwork is seamless when it matters most.

This sequel to The Awkward Squad finds the intrepid group of misfits on the outs with their colleagues on the Paris police force. Their first successful case exposed the wrongdoing of a fellow officer, making them traitors in the eyes of the rank and file. Morale in the unit is at an all-time low as its members bicker among themselves, review cold cases, and deal with petty bureaucratic snafus.

As the Christmas season begins, Capestan is called to the scene of a new murder. The victim is a retired senior officer from the anti-gang squad. The top investigative units of the police judiciaire are already on the case, and clearly reluctant to share their turf with Capestan. She wonders why the director (who hasn’t spoken to her in a month) is insisting on assigning her team to such a high-profile investigation. There’s one compelling reason: the deceased, Serge Rufus, was the father of Capestan’s ex-husband.

The Awkward Squad’s better-staffed and better-equipped rivals are eager to wrap up the murder of one of their own as soon as possible, and frequently omit important details from the information they share. Capestan struggles with conflicting feelings about her work and her ex. Despite these difficulties, the zany unit manages to stay one step ahead of its more straight-laced rivals. They quickly link Rufus’ killing to two other murders, suggesting the case is not as simple as it first appeared. However, the team’s involvement becomes complicated when it’s revealed a member of their team may be hiding personal ties to the case and a motive for revenge.

Stick Together offers a lively and humorous take on the police procedural. Combining painstaking evidence-gathering with madcap chase scenes, this lighthearted and breezy tale dives right into action and never slows down.

"No man was ever taken to hell by a woman unless he already had a ticket in his pocket, or at least had been fooling around with timetables."

MysteryScene RT @donwinslow: Very excited about the news today. My novel The Force is moving forward as a film from Fox/Disney with MATT DAMON starrin…
22h • reply • retweet • favorite