Books
Death of a Rainmaker: A Dust Bowl Mystery 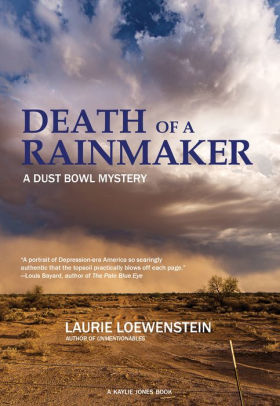 Laurie Loewenstein’s Death of a Rainmaker: A Dust Bowl Mystery takes us on a trip back in time to the not-so-good old days in Oklahoma, when the dust storms were so fierce they could kill anyone outside when they hit, and caused babies to die of “dust pneumonia.” The first sentence lets you know what you’re in for: “There is no man more hopeful than a farmer, who wakes each morning to the vagaries of a heifer gone off her feed, seed that doesn’t take, a late spring, an early autumn, too much rain, or, worst of all, no rain at all, and still climbs out of bed and pulls up his overalls.” In Dust Bowl Oklahoma, the farmers even had to attend the auctioning off of the farm they’d tilled so faithfully over the years. Accordingly, that’s how this wrenching novel begins, with a farm being lost to a combination of bad weather and greedy bankers. Hoping to stave off the inevitable, the farmers of Jackson County have hired a man who professes to be a rainmaker, desperately hoping that he will summon up the rains that will save their livelihoods, and in some cases, even their lives. But Ronald Coombs, the purported rainmaker, is a fraud. Not only does rain not come after he bombards the sky with TNT, but his efforts seemingly bring about the worst dust storm in Dust Bowl history. Later, when Coombs is found murdered in a sand drift, no one is surprised. The plot is solid in Death of a Rainmaker, but what makes Loewenstein’s novel so outstanding is the cast of characters she has assembled. Bankrupt farmers lead the list, but right behind them are the jobless men in the nearby “hobo” encampment. The fair-minded sheriff Temple Jennings, and his compassionate wife Etha are wonderful, too, as is the blind owner of the town’s movie house, and the doctor torn between reporting severe spousal abuse and keeping his patient’s secrets. The author’s powers of description come to the fore when Sheriff Jennings is caught in a dust storm and has to find shelter in the home of a farmer he will be forced to evict. These are all characters we care about, people who, although experiencing hard times, still manage to scrape together a few pennies to escape with Hollywood films starring Fred Astaire and Ginger Rogers, and newsreels featuring local hero Will Rogers. Death of a Rainmaker is a superb book, one that sets the reader right down amid some of the hardest times our country has faced, and lets us feel those hopeful farmers’ despair as they witness their dreams turning to dust.