"Norman Bates is the Hamlet of horror roles. Not your standard guy."
—Anthony Perkins, Photoplay, 1986 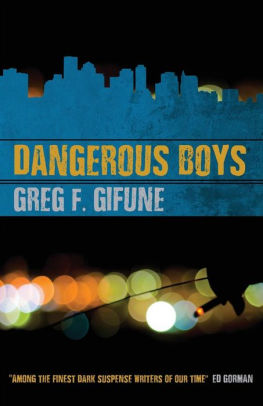 Set against the backdrop of a series of oppressive summer heat waves in 1984 New Bedford, Massachusetts, Dangerous Boys is billed as a cross between a less-than-bucolic coming-of-age story and a dark crime thriller.

Richie Lionetti serves as the story’s narrator as he and his group of friends make their way through life defending their turf. The axiom of “sex, drugs, and rock and roll” fuel their everyday lives, though the rock and roll is usually replaced by varying degrees of explosive violence and/or criminal activity. Richie is part of a gang of tough guys who keep themselves flush by pulling off petty crimes.

While the others in the group seem content with how their lives are going, Richie is restless and knows that he wants something more—even if he doesn’t know what that might be or how to get it. An opportunity for a major score presents itself as a way out for Richie, but things go explosively wrong and it becomes a race against time and the law to get themselves out of trouble before what’s left of their lives goes down the tubes.

Dangerous Boys lacks any clear character to root for. Richie, for all his desire for a better life, is just as bad as his friends and they all take a path that gets worse for them as the story unfolds. However, Greg Gifune’s examination of his characters’ lives is a finely wrought piece of writing. What’s more, the New Bedford setting is absolutely real—at times, I could tell you exactly where Richie and his friends were, because I’d been there myself. Gifune’s ability to make the reader want to see what’s coming next (even if one doesn’t particularly like Richie or his friends) is a fine example of how some bad guys, despite themselves, make for a good story.

“I was born when she kissed me. I died when she left me. I lived a few weeks while she loved me.”

—Dixon Steele (Humphrey Bogart), In a Lonely Place, 1950, screenplay by Edmund H. North and Andrew Solt based on novel by Dorothy B. Hughes