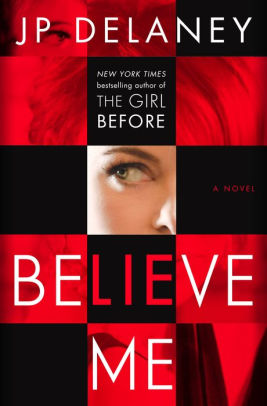 The cover design for Believe Me highlights the word “lie” at the center of “believe”, and it’s a very fitting concept for this psychological thriller where the reader never knows what to believe as the plot twists speed by one after the next. Claire Wright is a struggling British acting student in New York City. Without a green card, she’s desperate to earn money to survive. For cash, she agrees to work for a divorce law firm as bait to entrap unfaithful husbands and get incriminating video. But when one of the suspicious wives is brutally murdered—shortly after Claire fails for the first time ever to entrap the husband—Claire is faced with an even more questionable and dangerous proposition. The FBI and NYPD suspect the murdered woman’s husband is actually a serial killer, and make Claire an enticing offer: go undercover and try to lure the suspected killer into confessing in exchange for legal immigration status.

Claire, an orphan who grew up in a series of foster homes, studies an acting method that involves total immersion in character, and she’s brilliant at it. She has a chameleon-like ability to assume different identities convincingly, but this time she must convince even herself, and assume her character day in and day out around the clock. The suspected murderer, college professor Patrick Fogler, must trust Claire totally, and she needs to seem to be falling in love with him. She begins by sharing his interest in the decadent 19th-century poetry of The Flowers of Evil, by Charles Baudelaire. The lines between performance and reality soon become very blurred indeed as Claire begins to fall for Patrick for real, and to follow him to very dark places.

Believe Me features a fascinating central character and an intriguing scenario. The lines between pretense and reality cross and uncross until Claire isn’t sure whether she is the hunter or the hunted, whether she or her character truly loves Patrick, or how far she can trust him or the police. The story’s rapid and dramatic twists and turns ensure that the final outcome remains unguessable right up to the last surprising page.

"You see, but you do not observe."