"You see, but you do not observe."

Books
Death at the Selig Studios 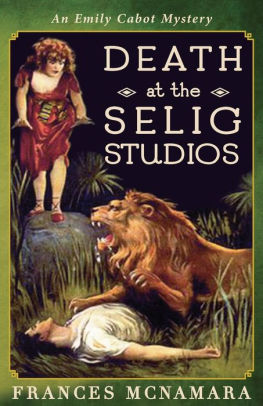 First some bad news. The cover of Frances McNamara’s Death at the Selig Studios, depicting a lion killing someone, is wrong. The good news? The dead guy was actually killed by a human-chomping leopard pack set free from the Chicago movie set of Hunting Big Game in Africa. Here’s some more bad news. Protagonist Emily Cabot, a wealthy Chicago matron, is a controlling busybody. Again, the good news: Emily’s out-of-bounds behavior is not only an asset here, it’s hilarious. If a relative or a friend has a problem—unrequited love, financial woes, etc.—she rushes right in to solve it. Film history buffs will have a ball with this entertaining historical mystery set in 1909, the early days of filmdom, when movie theaters were still being called nickelodeons, and when even Emily herself describes actors as “loathsome film people.” Those were the dark days when self-righteous censors could make or break an actress’s career by refusing to allow their films to be shown to the public. In Death at the Selig Studios, censor George Hyde seems bent on sabotaging the career of beautiful Kathlyn Williams, until he’s found shot dead on set (don’t worry, the aforementioned leopard pack is waiting in the wings to chomp down on a different victim). When Alden, Emily’s trouble-prone brother, is tagged for the crime, his big sis rushes to the rescue, aided by her friend Detective Henry Whitbread. Emily doesn’t really care about the censor’s death; she’s just irritated that her brother’s arrest will interfere with the family’s yearly retreat to their Woods Hole summer cottage. As it turns out, her high-and-mighty attitude helps break the case, because being wealthy herself, she’s not in the least intimidated by the new movie magnates. Author McNamara’s penchant for research shines brightly here. To populate this rollicking tale of early 20th-century greed, lust, and hypocrisy, she brings in the real-life personas and properties of Colonel William N. Selig, Thomas Edison (who invented motion pictures), Frank Baum’s Wizard of Oz, cowboy stars Tom Mix and Bronco Billy, and Olga Celeste, better known as the Leopard Lady. But Death at the Selig Studios isn’t only a historical who-did-what-and-when; it’s a dead-on psychological dramedy where rapidly changing social mores play merry hell with old-fashioned virtues. Seen in that light, Emily’s protective, if controlling, behavior with her ditzy younger brother is not only forgivable, it’s understandable. Like busybody Emily herself, Death at the Selig Studios is pure delight.

"Cats, as a rule, don't like lawyers. They have great insight into human character."