Books
A Season to Lie 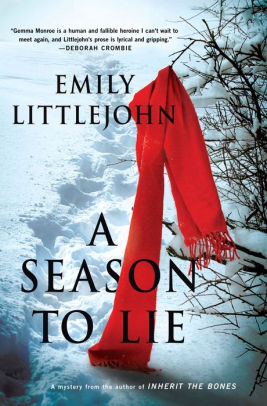 Cedar Valley, Colorado police officer Gemma Monroe’s first day back from maternity leave doesn’t turn out to be the easy transition she hoped for. Responding in the middle of a raging blizzard to a call about a suspicious prowler at a local high school, Gemma discovers the dead body of a famous author, Del Fuente, who has been living in town incognito while guest lecturing at the posh private school. The scarce and ambiguous clues point to a possible serial killer. Meanwhile, a mysterious bully known simply as Grimm (after the fairy tales) is tormenting the school’s students, and Alistair Campbell, a wealthy developer from back East with possible criminal ties, is snooping around Gemma’s family.

Are these threads connected, and if so, how? Why does the academy’s entire English department seem to be lying to Gemma? And when can she fit in a pumping break? Red herrings abound in this follow-up police procedural to Inherit the Bones, featuring the engaging, down-to-earth heroine. In addition to Gemma, A Season to Lie features a variety of quirky, colorful characters, from Gemma’s macho partner, Finn, to Campbell’s poetry-quoting, ex-con henchman, to anxiety-ridden recluse Lila Conway, the only person who knew the murdered author’s true identity. A second murder complicates the plot and keeps the reader guessing to the very end.

"The greatest crimes are caused by excess and not by necessity.”
—Politics, Book II, Chapter 7 by Aristotle circa 300 B.C.; English translation, Aristotle’s Politics, 1885, by Benjamin Jowett