"At gambling, the deadly sin is to mistake bad play for bad luck." 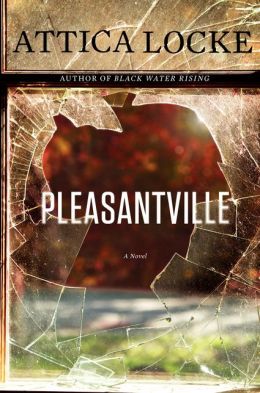 This novel is the second in Attica Locke’s Jay Porter series after Black Water Rising, though the two books are set 15 years apart, with this latest installment set in Houston, Texas, in 1996. Pleasantville is a solidly middle-class black neighborhood in Houston. Jay Porter, lawyer, recent widower, and father of two, is losing hope in a struggle over a giant lawsuit against a chemical company responsible for a lot of illness throughout Pleasantville (think Erin Brockovich). While Locke doesn’t specifically say it, Porter’s own wife died of cancer likely caused by the chemical company.

As the book opens, two key things happen: a young girl, apparently a campaign worker, disappears; and Jay’s office is burglarized. When the girl turns up dead, Neal Hathorne, the nephew of a high-profile politician in the midst of a mayoral race, is accused, and Jay is asked to defend him. Jay has little criminal law experience and feels over his head in the case, but the defendant’s powerful grandfather throws a high-powered legal team behind him, while Jay assembles his own: Lonnie, a down-and-out reporter, and Rolly, a tattooed, long-haired enforcer. Both are loyal to Jay without question.

Meanwhile, Jay’s clients in his environmental lawsuit begin to drop out, telling him they plan to leave and go with another lawyer. Jay’s discovery of the missing client files taken during the burglary suddenly makes sense.

Jay maneuvers his way through a morass that includes grief for his wife, life as a single father, the possibility of losing his business, and his work on a trial where he’s overwhelmed. On top of this, Locke places a dense layer of local and national politics, race, money, and power. The mix, like Jay’s legal case, is all a bit much. There was a good story underneath the details of political machinations and chemical plant lawsuit details, but the emotional heft of what Locke is trying to say is obscured by it all.

I was engaged by Jay and his family, and enjoyed Lonnie and Rolly, but there’s so much “story” that I couldn’t quite get a full grasp on any of the characters. I wanted to like this book much, much more than I actually did. When it finally arrived, the resolution was a good one, though its strength was lessened by an unnecessary epilogue. Too much is sometimes, simply, too much.

"Every man at the bottom of his heart believes that he is a born detective."