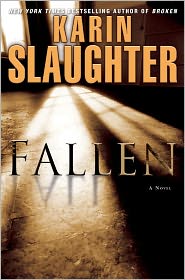 In her stunning new thriller, Karin Slaughter dares to deliver four female protagonists, not just one, but this seeming surfeit of riches never disappoints. When Faith Mitchell, an agent with the Georgia Bureau of Investigations, arrives at her mother’s Atlanta home to pick up her infant daughter, she finds blood on the front door, her mother missing, a dead man in the kitchen, and two gang bangers in the bedroom. She immediately shoots one, then the other during a running gun battle. Although baby Emma is found safe, the only men who might have revealed Faith’s mother’s whereabouts are now dead. In the immediate aftermath of the shootout, Faith, a diabetic, suffers a full blown health crisis, causing arriving Atlanta police officers to misconstrue her erratic behavior for inebriation. And that’s just the first chapter.

Slaughter’s rich tapestry of amazingly strong women includes Evelyn, Faith’s retired police captain mother; Amanda Wagner, her tough boss; and pediatrician Sara Linton (also lover of Will Trent, Faith’s police partner). Will’s horrific backstory could have made him the protagonist in any other book (a spin-off, perhaps?), and his clear characterization highlights another unusual aspect of Fallen. There are almost no “minor” characters, not even Roz Levy, Evelyn’s next door neighbor, who just might be a murderer. All are stars in their own right.

Fallen’s twisty plot features a ruthless drug cartel known for slitting people’s throats; a group of dirty cops, including one on death row; and a long-buried secret that may have led to Evelyn’s kidnapping. This complicated interweaving of plot, character, and multiple points of view could have sunk a lesser writer, but Slaughter’s an expert. She knows when to segue from one character to another, and how to weave a brand new thread into an already complex drama. During all this switcheroo, she keeps magnifying the tension, which—given that gulp-inducing first chapter—is downright miraculous. Superb in every way, Fallen is a virtuoso performance, Slaughter’s best work yet.