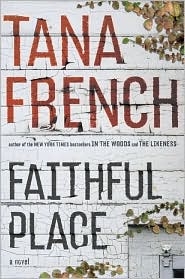 Tana French burst on the scene with her talented, but (for some readers) frustratingly ambiguous and highly literary first novel, In the Woods. Now, with her third novel, she’s thoroughly at home in the top ranks of crime fiction.

Frank Mackey runs undercover operations in Dublin. He’s a competent and no-nonsense cop who hails from a rough, hardscrabble slum where poverty is pervasive and nobody talks to the police. He left home as a teen, planning to head for England with the love of his life, Rosie Daly, but she stood him up. He hasn’t been back since—not until someone discovers Rosie’s suitcase shoved up the fireplace of an abandoned building. It seems Rosie didn’t betray Frank after all, and now he wants to know what really happened that long-ago night.

Faithful Place is a terrific book, full of richly-developed characters, a knotted tangle of close but badly frayed family ties, and a neighborhood that’s real down to every brick. Frank’s voice is funny and fierce, as down-to-earth as a lump of peat, and complicated to boot, but heartbreakingly true. French proves it doesn’t take serial murders, high-level conspiracies, or the world’s fate teetering in the balance to create a compelling, absorbing story. The lives of ordinary people on a single city block, observed closely with heart and skill, holds all the mystery anyone could ask for. Absolutely brilliant.

Tana French now thoroughly at home in the top ranks of crime fiction.