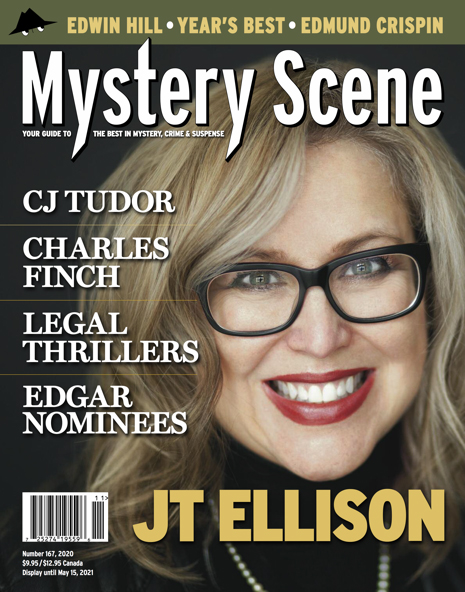 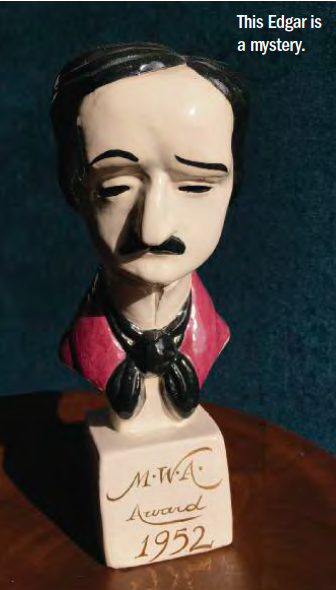 Look who we found hiding out with the crockery at a Connecticut estate sale! Because the sale included items from many sources, there’s no easy way to establish ownership. But, of course, there are only a few people that it could have belonged to. Was it Jack Webb’s Edgar for the radio drama Dragnet? It would be fitting if it once belonged to John Collier.

For this issue, Art Taylor assigned himself the task of reading all the Edgar short story winners from the founding of Mystery Writers of America to the present. In 1952, Collier’s “outlandish and gymnastic prose” resulted in an Edgar Award for the collection Fancies and Goodnights, which Art called “a masterpiece.”

In any case, 69 years later this prodigal son is on his way home to MWA. What a long, strange trip it’s been!

J.T. Ellison reveals her soft spot for the two lovers who star in her new novel, Her Dark Lies:

They are soul mates with deep secrets, secrets they’re sure will drive the other away. Their lives together are starting under such duress...what a fun way to start a marriage!

Well, fun for the author and readers, sure, but maybe not so much for the characters... John B. Valeri talks with Ellison in this issue. Chances are you’re familiar with Miklós Rózsa’s work, even if you don’t realize it. He’s the maestro behind a slew of noir film scores including Double Indemnity (1944) and The Killers (1946). Michael Mallory takes a look at his career in this issue.

Charles Finch has one foot in the past, as the author of the acclaimed historical novels about London aristocrat Charles Lenox. His obsession with Victorian London began while reading the stories of Sherlock Holmes. Finch is interviewed in this issue by Oline Cogdill. C.J. Tudor has created an interesting detective in her female Reverend Jack Brooks.

“Jack finds great comfort in God—in that idea of forgiveness,” Tudor says. “But she also uses her faith to protect herself. I find her conflicted relationship with religion interesting. The collar to her is armor in many ways—as she says, ‘Most people don’t look past (it).’” John B. Valeri talks to Tudor in this issue.

One of my most enjoyable projects every year is collecting lists of favorite books, TV shows, audiobooks, and short stories from our contributors. There’s a lot of great entertainment in our “Faves Raves of 2020,” don’t miss it!

Edwin Hill was inspired by his librarian grandmother and the vital role she played in her community when he created his detective, Harvard librarian Hester Thursby. Hill talks to Oline Cogdill in this issue.

Edmund Crispin was barely out of university himself when he created his sleuth Gervase Fen, an absentminded Oxford don. In The Moving Toyshop and other classics of the Golden Age, Crispin’s humorous, erudite style makes for sophisticated entertainment. Martin Edwards takes a look at Crispin’s work.

Jon L. Breen surveys current legal thrillers in “Disorder in the Court.” Also in this issue, we have an interesting My Book essay contributed by Catherine Maiorisi.