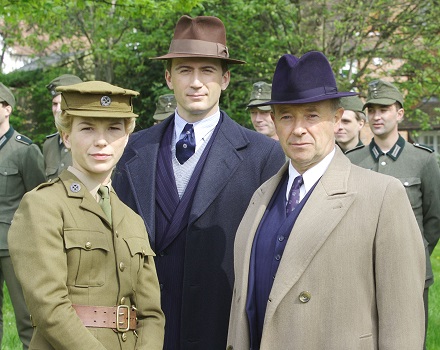 When it comes to showing the horror, the uncertainty and the anxiety of living in a country at war, few series come as close as Foyle’s War.

Through six excellent seasons, this British program has given an in-depth look at a society under siege during World War II through what essentially is a police procedural.

Foyle’s War revolves around police detective Christopher Foyle, played to perfection by Michael Kitchen. WWII is raging across the Channel, but Foyle, at first reluctantly, is assigned to the quiet English coastal town of Hastings in the Sussex area of Great Britain.

Foyle has great moral convictions but he also is a compassionate man, knowing that people are flawed and often succumb to their foibles. War often exacerbates these failings, making people forget their own sense of morals and give in to their baser feelings. 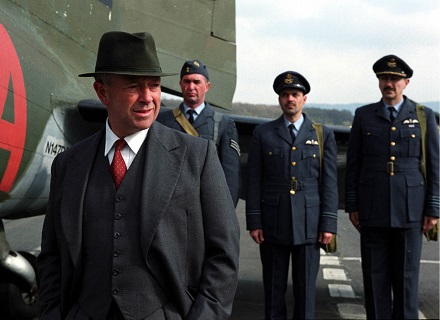 Kitchen, a well-known British television and stage actor, gives an understated, insightful performance. Kitchen’s expressive face shows Foyle’s shrewd way of looking at a crime scene or talking to a suspect. Foyle only needs a simple glance and a keen ear for the way people speak to prove how a true detective works.

Many of the crimes that Foyle investigates are connected to the war, such as murder, espionage, black marketeering and treason. Many of these crimes occur in peace time, but the war gives them an extra urgency. Too often he comes up against high ranking military officials because the criminals and murderers have special skills needed for the “greater good,” he is told, of the war effort. He also often comes up against the wealthy upper class who believe themselves to be above the law. They are, of course, wrong. 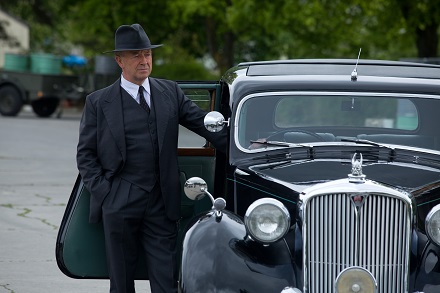 Foyle’s War begins in 1940. While battles don’t occur near Hastings, the town’s residents know the war is too close. A father and son who have just had good news are walking across a field when bombs begin dropping. A young woman sleeping in her bed is awakened by sirens; as she struggles to get out of bed, her flat mate is killed mere inches away. .

Foyle’s War also realistically delves into the anti-Semitism and pro-Hitler sentiments that existed. Perhaps one of the most heart-breaking episodes is when an Italian-born restaurateur who is a long-time member of the community is besieged by a mob consisting of friends and neighbors.

Because he doesn’t drive, Foyle relies on his driver Samantha "Sam" Stewart (Honeysuckle Weeks). At first, she annoys him but soon earns his respect because of her intelligence and commitment to her job. As the series progresses, he think of her as a daughter.

Foyle often is assisted by Detective Sergeant Paul Milner (Anthony Howell), who was a cop before the war. Milner lost a leg in the invasion of Norway and Foyle encouraged him to return to police work. Milner’s job and handicap strain his marriage.

A widower, Foyle has a close relationship with his son, Andrew (Julian Ovenden), a fighter pilot in the Royal Air Force. 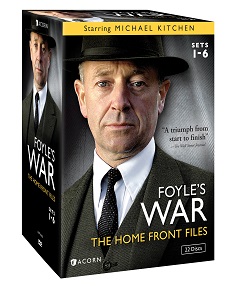 Creator and scriptwriter Anthony Horowitz has been lauded for the series’ historical accuracy, allowing the events of the war to move along the plots. Still, there are times when liberties are taken with history, but these are in the minority.

The six seasons of Foyle’s War are perfect for those of us who like to binge watch. And I have been binging on this excellent series with multiple viewings. As bonuses, the package of the six seasons includes interviews with Horowitz, Howell and Weeks, "making of" documentaries, information on historical backgrounds, a look at a real-life Foyle, among other highlights.

The three-episode seventh season of Foyle’s War has just begun on Sundays on PBS; check your local listings. In the seventh season, it is 1946 and the war is over. Foyle has retired from the police force. But his investigative days are not over. He is recruited by MI5, the British Intelligence Agency, to investigate spies. Sam is still around, now married to a rising young Labour politician.

The change from the rural Hastings to urban London hasn’t diminished the enthralling storytelling of Foyle’s War. There is still a war to fight. And Christopher Foyle is still on the job.

Here are the awards presented during the Bouchercon 2013 weekend.

Congratulations to all the winners as well as to the nominees. In each category, competition was stiff.

Winners have ** in front

The Shamus Award is presented by the Private Eye Writers of America. The winner were announced at the PWA Banquet at Bouchercon.

Best Original Paperback P.I. Novel
**And She Was by Alison Gaylin

The Macavity Award is named for the "mystery cat" of T.S. Eliot (Old Possum's Book of Practical Cats). The winners are selected by the members of Mystery Readers Internationa. nominate and vote for their favorite mysteries in four categories. 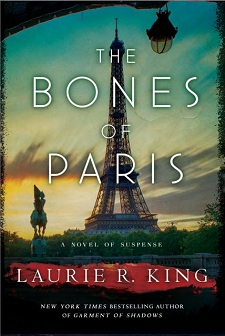 Laurie R. King’s novels about Mary Russell and Sherlock Holmes are renown for her vivid re-imagining of the Holmes cannon.

These novels also are intensely linked to the time and place, beginning with the couple’s first meeting in 1915 Sussex Downs. The latest novel in this series, Garment of Shadows, finds Mary Russell and Sherlock Holmes in Morocco.

(Here's a link to a profile Mystery Scene ran on Laurie R. King.)

King goes back in time again for her latest novel, The Bones of Paris, which has just been released.

The Bones of Paris, a follow up of sorts to her 2007 Touchstone, transports the reader back to 1929 Paris, a heady time during which Americans found a refuge in the City of Lights.

The Bones of Paris revolves around Harris Stuyvesant, a former agent with the American Bureau of Investigation turned private investigator. Harris is hired to find a missing American girl who was living in Paris.

The well-designed plot takes the reader through the streets of Paris.

“A dizzying panorama of rooftops: Tiles and tin, brick and timber, steeples and drying laundry; centuries of chimneypots and a narrow slice of stone magnificence in the distance. Children’s voices and taxi horns competed with a tram rattle from the rue de Rennes and a neighbor’s accordion, mournfully wading through a lively tune.”—The Bones of Paris

King adds texture and a solid sense of place to The Bones of Paris by injecting real people into the story.

Paris in 1929 had a thriving ex-pat community of artists and writers and King makes the most of these.

“The Dôme was the most American of the American-driven cafes on the boulevard Montparnasse. Every second shouting mouth bore a New York accent, and the rest were from Chicago or Jersey.”—The Bones of Paris

“Why do so few Americans bother to learn the language? People like that Stein woman—you know her? She has been here for years, yet can scarcely order a cup of coffee.” —The Bones of Paris

These people, as well as a few others, are added to give the story texture and King uses them sparingly.

On Sylvia Beach, the owner of the wonderful bookstore Shakespeare & Co., King writes: “Sylvia Beach stood in the doorway of Shakespeare and Company, looking like a wind-blown city sparrow. She was talking to a poet. Stuyvesant knew he was a poet by the hair, not so much cut as pruned—but then, who in Montparnasse wasn't a poet? .”— The Bones of Paris

A terrific slide show of Paris is on King’s web site as is an interactive map that refers to scenes in the The Bones of Paris. 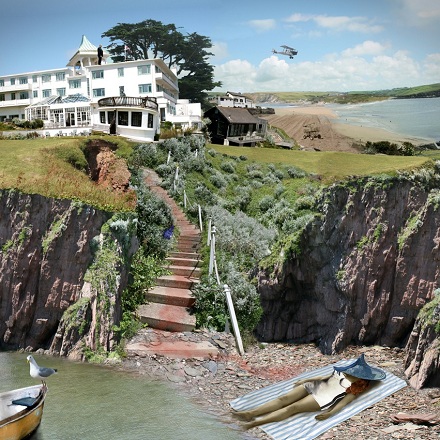 Time is nearing but if you are planning a trip to Great Britain soon, consider a stop at Burgh Island Hotel located in Bigbury-on-Sea in Devon, England.

Why the rush to England?

Because a private exhibit on Agatha Christie ends on Sept. 24. Admittedly, this exhibit began in July but we just found out about it.

While it may be too late for many of us to contact our travel agents—does anyone still have a travel agent?—think about next year because the property looks amazing.

A collection of playful and theatrical collages will be on display at the Burgh Island Hotel to coincide with this year’s Agatha Christie Festival.

“Agatha Christie, a life of ladders and snakes” is a series of 10 images capturing some of the key moments in the life of the queen of crime. The pieces were originally created for the Agatha Christie Festival in September 2010, which celebrated the crime writer’s 120 years since her birth.

OK, first, I didn’t know there was an Agatha Christie Festival in Devon, but I can’t say I am surprised.

This year’s festival began on Sept. 15 and runs through Sept. 22 (see what I mean about the timing). But there will be one next year. All the details are here.

According to the website, “Each year, the English Riviera transforms itself into the murder mystery capital of the country, with ladies and gents in their period finery immersing themselves in tea parties, theatre, dinners on steam trains and vintage bus tours. Why? For the annual award-winning Agatha Christie Festival in honour of the Queen of Crime, who was born in Torquay in 1890.”

The collages document the ups and downs of Christie’s life. Since their creation, the collages have been exhibited at Torre Abbey, Greenway National Trust, London’s Science Museum and various art fairs throughout London.

During 2012, the collection traveled around American art fairs, including a stop in the Empire State Building for a pop-up exhibition entitled “Art at the Top.”

A new piece “Daydreaming” was added to the collection, which includes a number of suspects, victims, witnesses and murderers and is a fictional cocktail party from the 1920’s that could have inspired the author’s storytelling.

Two additional pieces, based on the novels And Then There Were None and Evil Under The Sun written while Christie was on holiday at the hotel, have been launched at the Burgh Island exhibition.

Photo: Sunworshipper from the collage collection; notice the reference to Evil Under the Sun in the lower right hand corner.  photo courtesy Tracy Satchwill 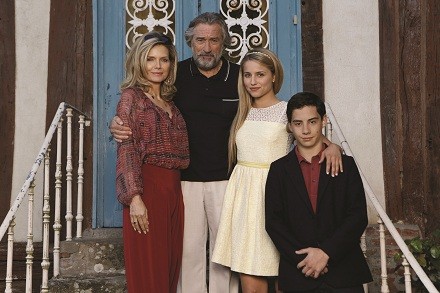 The ads for the new film The Family seem to come every 10 minutes on television.

For those three people who have not seen the clips from this film that opens on Sept. 13, it stars Robert De Niro, Michelle Pfeiffer, John D'Leo and Dianna Agron (Glee) as a mafia family living under the witness protection program in France. Tommy Lee Jones is the agent trying to keep them safe.

The clips are so detailed I feel as if I have seen the movie already.

Some readers may feel as if the story is familiar, too.

Although the film clips barely acknowledge it, The Family is based on the 2010 novel Malavita, which translates to Badfellas, by award-winning French author Tonino Benacquista. Benacquista also is a co-writer of the script; The Family is directed by Luc Besson.

According to The Family’s press release, “a mafia boss and his family are relocated to a sleepy town in France under the witness protection program after snitching on the mob. Despite the best efforts to keep them in line, Giovanni Manzoni (De Niro), his wife Maggie (Pfeiffer) and their children, Belle (Agron) and Warren (John D'Leo) cannot help but revert to old habits and blow their cover by handling their problems the "family" way, enabling their former mafia cronies to track them down.”

Malavita refers to the family’s dog that accompanies De Niro’s character everywhere. Unfortunately, I couldn't find any photos of the dog in the press photos.

The Family is rated R for violence, language and brief sexuality.