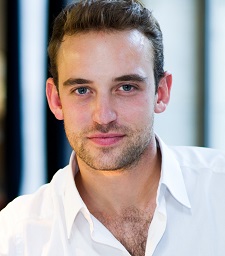 Joël Dicker’s The Truth About the Harry Quebert Affair (Penguin) is one of the summer’s most talked about novels. Now making its U.S. debut, the Swiss-born, 29-year-old’s novel became an immediate international bestseller when it was released in Europe during 2012.

Set in a quintessential small town in New Hampshire, the novel revolves around Marcus Goldman, a young author who had a massive blockbuster a couple of years ago and is now suffering from a massive bout of writer’s block. Then Marcus’ mentor, Harry Quebert, is arrested for murder when the body of Nola Kellergan is found on his land more than 33 years after the teenager disappeared. Marcus travels to New Hampshire to support Harry, and, as a result, may find his way into his next book.

Q: The Truth About the Harry Quebert Affair weighs in at 636 pages; did you ever think about making it shorter?
A: I cut over 300 pages while writing this book. So, I guess I can tell you that the story could have been even longer! On a more serious note, I did ask myself if I should take out a few of the twists. But in the end I preferred to leave the book as it was, in order to convey my own enthusiasm to my readers. 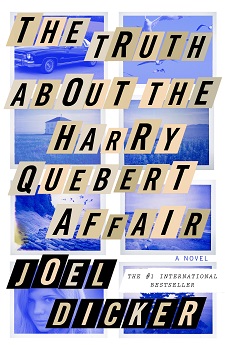 Q: What are your favorite novels?
A: The Sea Wall, by Marguerite Duras. Of Mice and Men, by John Steinbeck. Belle du Seigneur, by Albert Cohen. Poor Folk, by Doistoievski.

Q: Are you amazed at the response that The Truth About the Harry Quebert Affair received in the European markets?
A: Obviously: how could I have ever imagined, when signing the publication of my book in a tiny Parisian publishing house, that my book would be translated into 37 languages and read by millions of people? I am very thankful for everything that is happening to me.

Q: What are your thoughts about The Truth About the Harry Quebert Affair being compared to Lolita?
A: There’s nothing comparable. When imagining that I would develop the novel around a relationship between Nola and Harry, I immediately thought of Lolita. And therefore my allusion in the book with N-O-L-A. It was my way of mentioning the inspirations that arise in the creative process. I had read Lolita only once, when I was 15. I re-read it a few months ago, after my book’s success, and I realized that I hadn’t understood everything in the book.

Q: What are you most proud of in The Truth About the Harry Quebert Affair?
A: When I receive messages from my readers, especially young readers, who tell me they weren’t big readers, but that my book got them started and now they want to read more books. I think we all have to work hard to encourage people around us to read more.

Q: Who do you read?
A: I’m a really open reader. I read just about everything that I come across. Lots of French and American literature. Right now, I’m reading Jean-Christophe Ruffin’s last book, as well as Good People by Nir Baram. Two very good books. 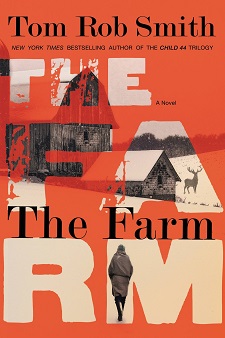 The question of where do you get your ideas comes up at just about every author’s book signings.

At least the ones I attend.

But the answer is never simple. Ideas for novels come from myriad sources—from the news, from an idea sparked by an incident in the supermarket and, sometimes, from an author’s own life.

Even if it is a painful part of one’s life.

Tom Rob Smith borrows something from his past for the plot in his latest novel The Farm.

In The Farm, an adult son learns that his Swedish mother, Tide, and British father, Chris, no longer trust each other. His father says that his mother is psychotic, which his mother denies.

Throughout the 29-year-old’s life, his parents’ marriage had seemed to near perfect, with any sign of discontent concealed from their son. Chris tells Daniel that his mother has vanished following a breakdown. Then Tide shows up at Daniel’s apartment, claiming her husband has been trying to gaslight her. She’s armed with a briefcase full of evidence and a lifetime of resentment.

Who should he believe? And who should the reader believe?

Smith, best known for the Cold War-era series Child 44, used his experience with his own mother’s mental illness for The Farm.
Like his protagonist, Smith also didn’t know who to believe—his father who was obviously upset about his wife’s mental state or his mother who insisted she was fine.

Smith’s true story has a happier ending, which he wrote about in an essay published in the London Times: “The doctors have been so impressed with my mum's recovery that she now gives talks to other women on the nature of her experience. My parents are together and, if anything, closer than ever - a team again. In the same way, I also feel closer to both of them. Part of growing up is relearning who your parents are and being there for them in a way that they were for you, as a child, on countless occasions.”

Smith’s essay about his parents can be accessed here.

The Farm has been receiving positive reviews, including a starred review in Publishers Weekly and glowing quotes from Mark Billingham and Jeffery Deaver.

The film adaptation of Child 44, starring Tom Hardy, Noomi Rapace, and Gary Oldman, is due for international release in October.

BBC Films and Shine Pictures have purchased the film rights to The Farm. 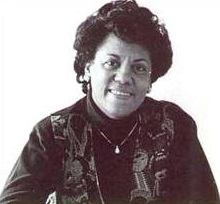 Several opportunities exist to help new or unpublished writers receive grants and awards. Sometimes even a small grant or a scholarship to a writers’ class can mean a big difference.

The Eleanor Taylor Bland Crime Fiction Writers of Color Award is a one-time grant of $1,500 for an emerging writer of color.

An unpublished writer is preferred, although publication of one work of short fiction or academic work will not disqualify an applicant.

This grant is intended to support the recipient in activities related to writing and career development, including workshops, seminars, conferences, and retreats; online courses; and research activities required for completion of the work.

Sisters in Crime administers the grant.

Bland, at left, was a pioneer in crime fiction.

Dead Time, her first novel in the Marti MacAlister series was published in 1992. Marti was an African American female police detective working and living in a Midwestern American town that closely resembled Waukegan, Illinois, where Bland lived.

When she passed away in 2010, she was one of the most prolific African-American authors in the genre.

Deadline for applications is July 4, 2014. The winner will be selected and announced during the fall of 2014 by Sisters in Crime.

The nominations for the Macavity Awards have been announced. These awards are nominated and voted on by members and friends of Mystery Readers International.

Winners will be announced at Bouchercon, the World Mystery Convention in Long Beach, Calif., on November 13. Congratulations to all nominees.

Best Nonfiction
The Lady and Her Monsters: A Tale of Dissections, Real-Life Dr. Frankensteins, and the Creation of Mary Shelley's Masterpiece by Roseanne Montillo (William Morrow)
Being Cool: The Work of Elmore Leonard by Charles J. Rzepka (Johns Hopkins University Press)
The Hour of Peril: The Secret Plot to Murder Lincoln Before the Civil War by Daniel Stashower (Minotaur Books) 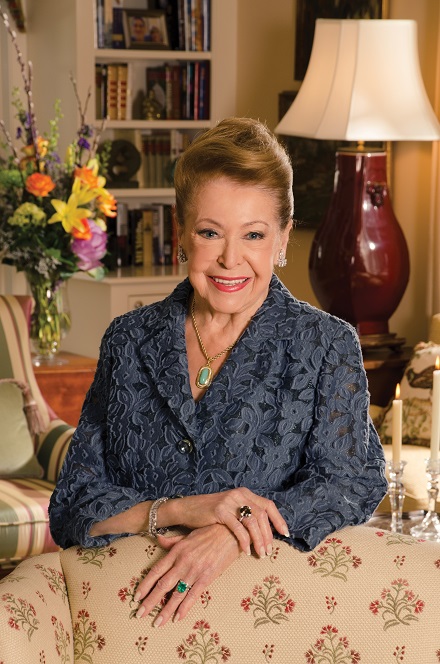 For more than four decades, Mary Higgins Clark’s standalone novels have been a mainstay of best sellers lists.

For the past decade, Alafair Burke has proven to be a skillful writer, creating both series and standalone novels with involving plots and believable characters who readers care about.

Both authors have amassed a solid following and their readers often overlap.

Now readers will have both authors in one book.

Clark and Burke will collaborative on one novel.

The Cinderella Murder will be published in November and feature characters Clark introduced in her most recent No. 1 New York Times bestseller, I’ve Got You Under My Skin.

The Cinderella Murder will be the first collaboration novel Clark has written with an outside author, and the first time she has undertaken a continuing series.

This collaboration has been a well-known secret for a few months as it has been posted for advance buys on several online retail sites.

Needless to say, the publishers are excited about this venture, which I think will attract a lot of readers.

“This suspenseful collaboration is going to produce a lot of sleep-deprived readers,” said Karp in the press release.

Added Rucci in the same release: “Mary Higgins Clark’s astonishing talent and popularity are bar none. We’ve long wished we could clone her! This exciting collaboration with the wonderfully talented Alafair Burke is the next best thing.” 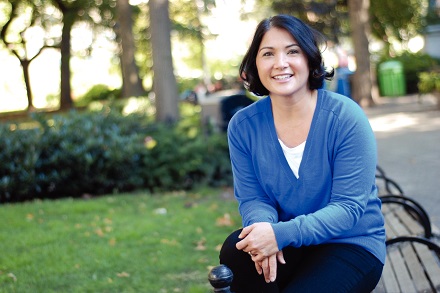 The Cinderella Murder will continue the story of television producer Laurie Moran’s investigations into cold case murders. Laurie’s show investigates the decades-old murder of a beautiful UCLA student whose body was found in the Hollywood Hills missing a shoe. The murder was dubbed the “Cinderella Case” by the press.

This sounds like the kind of story that both Clark and Burke handle well. Both authors imbue their novels with believable suspense.

“I'm so honored to be working with Mary Higgins Clark, whom I've admired both personally and professionally for years. Watching her at work is like a master class,” said Burke in an email to Mystery Scene.

“She [Clark] really does have a way of putting suspense on every single page. Hopefully I can take those lessons back to my own work,” added Burke in the same email.

Both authors will continue to write their own novels, in addition to this collaboration.

Clark’s first novel, Where Are The Children?, was published in 1975 by Simon & Schuster in 1975. Since then, she has published 46 books, 33 of which are suspense novels. She coauthored five holiday mysteries with her daughter Carol Higgins Clark. Her books have appeared 20 times in the No. 1 slot on the New York Times and have sold more than 100 million copies in the United States alone.

Burke’s 10 bestselling novels include If You Were Here and most recently, All Day and a Night, the fifth in her Ellie Hatcher series. Her Samantha Kincaid series is set in the Multnomah County District Attorney's Office, (Portland, Ore.) where Burke worked in the 1990s. Her other series features NYPD Detective Ellie Hatcher.

Her novels often draw on real-world crimes and are known for their authentic plots. Burke also is a former prosecutor who currently teaches criminal law at Hofstra University in New York.

MysteryScene RT @TheBlondePI: Look what I just got in the mail! @MysteryScene with their Fave Raves of 2020 section. @TheOneTrueJay picked my mystery/th…
10h • reply • retweet • favorite