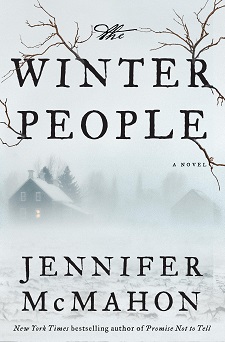 Robin Thicke sings about blurring the lines, but mystery writers have been doing that for years.

The myriad categories of crime fiction have increasingly been melding. And that is good news for readers as it means stories that are deeper, richer, and more realistic.

Jennifer McMahon has been added touches of the gothic in her plots for several novels. Her 2013 best-seller The One I Left Behind was a gripping psychological thriller about the affects of childhood trauma with a touch of the gothic to make the story even more fascinating.

McMahon goes a step further with her latest novel The Winter People.

In this novel, McMahon doesn’t just add a touch of the gothic – she embraces it full throttle. Here's my review.

In The Winter People, a string of disappearances in a small Vermont town date back to 1908 when a grisly murder and the death of a child changed the town.

The Winter People is equally a mystery as well as a ghost story—a chilling tale no matter what the genre.

McMahon currently is on tour for The Winter People, her first hardcover novel after a string of best-selling paperback originals. She’ll also be at SleuthFest this week.