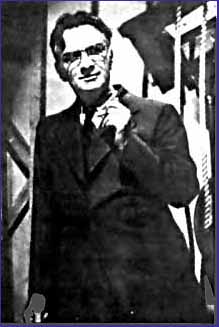 Judging from the start I have on mysteries that will be published this year, 2012 is shaping up to be a very good year indeed.

One of the hot new novels scheduled to be published this year will be from one of the genre's masters -- James M. Cain, the late author of such noir classics as The Postman Rings Twice and Double Indemnity.

Hard Case Crime plans to publish during October, 2012, Cain's novel The Cocktail Waitress, the last book he wrote before his death in 1977, but which was never published.

The Cocktail Waitress is the story of Joan Medford, a beautiful young widow who begins to work in a bar following the death of her husband under "suspicious circumstances." There she meets a handsome young schemer she falls in love with and a wealthy older man she marries.

In a 1976 interview with Film Comment magazine and quoted by the Pulp Serenade web site, Cain said that "in my stories there's usually stuff that you wouldn't think any human being would tell at all."

"I've just finished a book called The Cocktail Waitress, where the girl tells her story, and there's some pretty intimate stuff. This girl, like most women, is very reticent about some things – you know, the sex scenes, where she spent the night with a guy. I had her tell enough so that what happened was clear and, at the same time, not go into details. Once she lingered with a sex scene, as if she wanted to tell it," Cain said in the magazine interview.

The manuscript includes numerous notes and edits by Cain, according to Charles Ardai, founder and editor of Hard Case Crime.

"It’s a bit hard to say how close to his death the last revisions were, since they’re handwritten and undated, but I believe he wrote the first draft of the book around 1975 and he died in 1977, so any revisions pretty much had to have been made close to the time of his death. There are numerous handwritten notes and edits by Cain; I’ve spent much of the past few months working on deciphering them," said Ardai.

Cain also wrote several novels not considered crime fiction, such as Serenade and Mildred Pierce, which was made into an Oscar-winning movie in 1945 starring Joan Crawford and an intriguing 2011 HBO series starring Kate Winslet.

Cain was quoted as disliking being labeled as a hard-boiled author: “I make no conscious effort to be tough, or hard-boiled, or grim, or any of the things I am usually called.”

In the introduction to Double Indemnity, Cain said: “I merely try to write as the character would write, and I never forget that the average man, from the fields, the streets, the bars, the offices, and even the gutters of his country, has acquired a vividness of speech that goes beyond anything I could invent.”

I hope 2012 brings a renewed interest to Cain's wonderful work.