In this recurring series, authors discuss their works, how they write, and who their characters are.

Award-winning author Terrence McCauley, left, continues his James Hicks series with the publication of A Murder of Crows (Polis Books). Hicks and his clandestine intelligence group are known as the University. In A Murder of Crows, Hicks and crew try to capture the elusive terrorist known only as The Moroccan and thwart a bio-terror attack against New York City. But they are not alone in their pursuit. The CIA, NSA, DIA and the Mossad also are hunting for The Moroccan.

McCauley launched his first techno-thriller, Sympathy for the Devil, published in 2015 by Polis Books, which also reissued his first two novels set in 1930 New York City—Prohibition and Slow Burn. He also has written the WWI novella The Devil Dogs of Belleau Wood, for which proceeds from sales directly benefitting the Semper Fi Fund.

Who Is James Hicks? 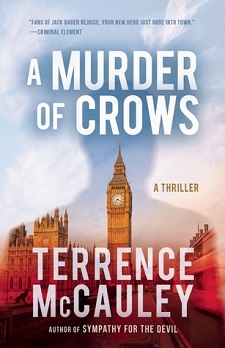 That’s a good question and one I hope to continue to answer over the course of the next several books in The University series.

If you haven’t read my work before, it’s probably a good idea for me to introduce you to him by telling you what he is not rather than what he is. He’s not an ex-Special Forces operative pulled back into the intelligence arena against his will or by happenstance. He’s not a naive analyst caught in a web that is much larger than he anticipated. He’s also not a gung-ho, gun-crazy operator who believes in shooting first and asking questions later. He doesn’t own a tuxedo and he doesn’t drink martinis—shaken or otherwise.

Then who is he?

In Sympathy for the Devil, published in 2015, we find our protagonist James Hicks works for an intelligence organization known simply as The University. I wrote the story in such a way as to make the University’s boundaries intentionally vague. I did my best to follow one of Elmore Leonard’s rules of writing: avoid writing the parts readers like to skip. No one wants to sift through paragraph after paragraph of expository information about an organization they don’t know. I know I don’t. My eyes tend to cross as soon as an author gets into the hierarchy of an organization. They also tend to roll when I hear the head of the group has a ‘direct line to the president’ or something like that.

Rather than using long paragraphs to tell the reader about the University and the technology it possesses, I decided to show the audience how the University operates in our world. I demonstrate the University’s ability by having them use smartphones and a massive computer access to show the institution’s technological reach and power. I don’t hit the reader over the head with it. I don’t have to. Every time the reader accesses Facebook or grabs their smartphone, the power of the fictional entity I created is reinforced in the real world. This helped me cut down on a lot of exposition, which allowed me to concentrate on the characters and the story.

And since James Hicks is the central character of the story, some questions arise. Who is he? What does he look like? What’s his background?

I’ve read a lot of thrillers in my time and desperately wanted to avoid some of the tried and tired ways authors explain their protagonist’s background. It usually involves someone somewhere reviewing a file wherein all of the details of the character’s past are revealed.

His background becomes a bit clearer in A Murder of Crows—which comes out in July 2016—but not by much. Don’t expect flashbacks or a childhood memory or discussion of a file to give you a sudden revelation of Hicks’ identity or his background. He is very much a product of his world, so facts are never that easily presented.

That’s why I intentionally leave a lot of Hicks’ appearance open to the reader’s interpretation. I wanted the reader to have a sense that he was average looking, neither tall nor short, neither ugly nor handsome. He was easy to forget, which was one of his core assets. What does he look like? That’s up to the reader’s imagination to fill in the blanks their own way and it seems to have paid off. One of my favorite questions to readers is: What actor would you chose to play Hicks? I’ve gotten everything from Jeremy Renner to Duane ‘The Rock’ Johnson. That would annoy some authors, but I think it’s great because that’s exactly the kind of ambiguity I wanted to create about his appearance.

I chose to focus on his personality instead. I created a character who is ruthless and cunning, a highly intelligent man who is equally good with his fists as with his intellect. He has survived in the intelligence game for a long time in many roles, so he had to possess a thoughtful lethality in order to live for as long as he has.

That doesn’t mean he’s likable. During one panel session at a writer’s conference, one of my fellow panelists said they didn’t like Hicks. They found him brutal and mean and unlikable. I didn’t bristle at the comment because that was the panelist’s particular take on the character. Fortunately, I’ve had several people tell me they found Hicks refreshing. They liked his ruthlessness. They liked his cunning and his deadly nature. They didn’t see him as a butcher or a psychopath, just someone who was willing to do whatever it took to get the job done.

In the next several books to come, the readers will find out much more about Hicks’ background but only insofar as it serves the plot. His past will be used against him as much as his past frees him to do the kind of work he needs to do in order to fulfill his mission: to keep our way of life safe.

Who is James Hicks?

And I hope we’ll have the opportunity to continue to find out together in the years ahead.