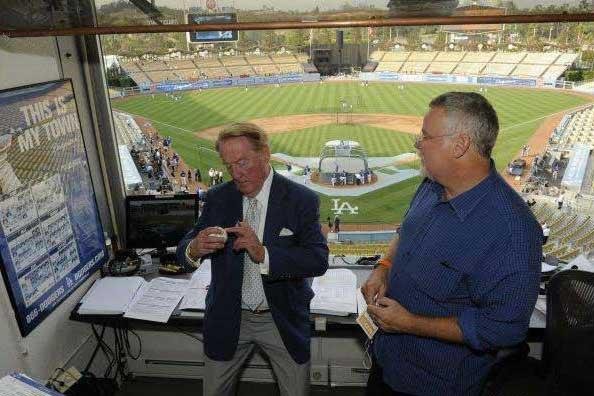 How do you thank someone who has brought joy to your life?

Michael Connelly found a special way to thank one of his heroes—he dedicated his latest novel The Wrong Side of Goodbye to Vin Scully, who, for 67 seasons, until his recent retirement, was the voice of the Dodgers.

The legendary sportscaster began his years with the Dodgers in 1950, back when the team was the Brooklyn Dodgers, and ended his time this year in Los Angeles.

That made Scully the longest-tenured of any broadcaster with a single team in professional sports history.

This record-breaking run is amazing and his legions of fans will miss his voice.

And that includes Connelly.

The dedication in The Wrong Side of Goodbye says it all:
“To Vin Scully
With many thanks”

And, without giving away any plot point, Connelly also features Scully in a couple of scenes in The Wrong Side of Goodbye.

Harry Bosch, Connelly’s iconic hero, remembers listening to Scully when he was on surveillance for a major case: 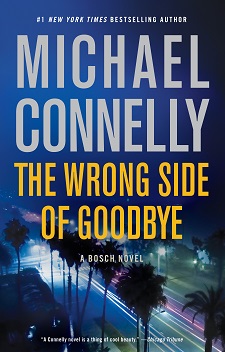 “We could hear the broadcast coming out of all the open windows of the houses,” Bosch says in The Wrong Side of Goodbye. “I wanted to bail on the surveillance and go over for the last inning. You know, badge our way into the stadium and watch. But we stayed put and listened to Vinny.”

Bosch’s memory is tinged with victory—he caught the criminal—and sadness as he contemplates Scully’s retirement.

“He’s the voice of this city. It won’t be the same without him,” Bosch adds.

Devout readers feel the same way about Bosch—the genre wouldn’t be the same without him.

Fortunately, Connelly leaves the door open for new Bosch tales. Goodbye may be in the title, but The Wrong Side of Goodbye is in no way Bosch’s swan song.

This is isn’t the first time that Connelly has paid homage to Scully.

In a 2009 interview with Parade magazine, Connelly said, “Scully is the voice of my favorite team in all of professional sports—the Dodgers. He’s also one of my heroes. Players and managers come and go. Even some fans. But Scully is always here. He has called nearly 10,000 Dodger games and in the process transcended the game. At 81, he’s as much an icon in Los Angeles as the Hollywood sign.”

Scully was 88 when he retired just a few months ago, and, I think, he is one of those people who always will be associated with Los Angeles.

Connelly’s dedication is the ultimate “thank you” from a fan.