Aurora Teagarden on the Screen 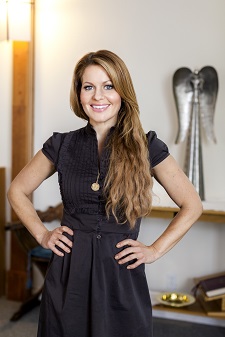 Before Charlaine Harris created telepath waitress Sookie Stackhouse and the vampires who resided in Bon Temps, Louisiana, the author had Aurora Teagarden, a sharp-as-a-tack librarian in the quiet town of Lawrenceton, Georgia.

While these novels certainly could be considered amateur sleuths, they weren’t as “cozy” as one might expect. Harris always had an eye for the darkness that lurks just below the surface.

Sure, there was humor, and very little overt violence, in these novels. And the name Teagarden seems tailor-made for a cozy. But Harris also added that extra bit of noir to seep in.

While it is doubtful that Harris will ever write another Aurora Teagarden novel, this series is getting a terrific reboot on the Hallmark Channel and the Hallmark Movies & Mysteries Channel.

A Bone to Pick, the first Aurora Teagarden movie, debuts at 9 p.m., April 4, on both channels. Check your local listings for time changes, etc.

Candace Cameron Bure (Full House) delivers an impressive performance as Aurora, whose career as a librarian plays into her hobby as a sleuth and member of the Real Murders Club, a group that gets together to analyze crimes during its monthly meetings.

Aurora is close friends with Jane, an elderly member of the club who is especially interested in the history of women murderers. Jane, a retired librarian, sees herself in Aurora. The day after Aurora picks up a book from Jane, the older woman passes away.

Aurora is upset over her friend’s death, but stunned to learn that Jane’s will leaves her everything. Aurora now owns Jane’s house, money, possessions, including a skull that seems to indicate the person had been murdered.

Taking over Jane’s house, Aurora finds a neighborhood filled with secrets, including mysterious break-ins, missing children, and families in flux.

A growing romance with a sexy minister and Aurora’s close relationships with her best friend, Sally, and her meddling mother add to the plot. 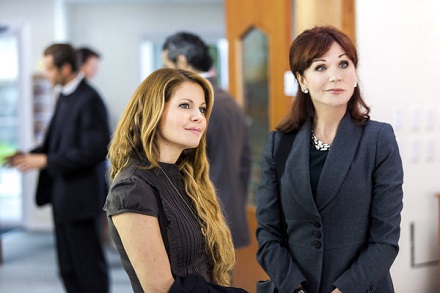 Bure brings a sense of vulnerability and steely intelligence to Aurora. She understands the character’s ambition and independence.

Marilu Henner brings her usual fine acting chops to the role of Aida, Aurora’s mother who wants her daughter to be happy, yet can’t help meddling every now and then. Lexa Doig as Sally and Stephen Huszar as Father Scott Aubrey add the likable cast of characters.

A Bone to Pick does justice to Harris’ novels.

A Bone to Pick, the first Aurora Teagarden movie, debuts at 9 p.m., April 4, on both the Hallmark Channel and the Hallmark Movies & Mysteries Channel. Check your local listings for time changes, etc.