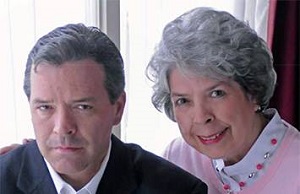 Those of us who love the mystery genre know that these stories can touch our hearts.

The ideas of whodunit, nonstop action and puzzle solving take a back seat to those emotional stories that show us who we are and how we deal with issues such as grief, marriage, friendship, corruption, abuse, and the past.

The legacies the authors leave last forever, and the passing of one of our beloved authors affects each reader.

Under the name Charles Todd, Caroline and her son Charles have written two series set either during World War I or immediately after—the Ian Rutledge series about the Scotland Yard detective who suffers from shell shock and the novels about British Army nurse Bess Crawford, who spent much time on the battlefield caring for soldiers.

The Todds’ novels are remarkable for their intelligent look at history—their research so meticulous that they gave presentations at the National World War I Museum and Memorial in Kansas City, Mo.—and their three-dimensional characters. 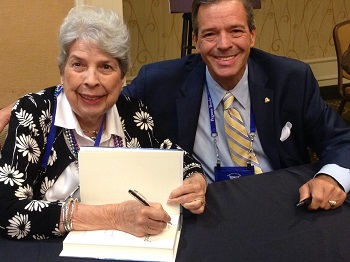 In the aftermath of The Great War that claimed so many lives, the Todds’ novels show why each death—whether many or one—was so important.

It’s not uncommon for mystery characters to have integrity, compassion, a thirst for justice. These characteristics are the bedrock of both Ian and Bess.

Through these characters, the Todds delve into the societal changes brought on by WWI. A recurring theme in the Ian Rutledge novels is how the war still affects him. Ian must keep hidden that the war left him shell shocked—what we call PTSD today—which, during that era, was viewed as lacking “moral fiber” or cowardice.

We also learned about the often-forgotten details of the war.

In A Fatal Lie, readers learn about the Bantam Battalions, which were squads of soldiers who had not been allowed to enlist because they didn’t meet the height restrictions. Short in stature, but long in the desire to serve their country, a special battalion was established, resulting in hundreds of young men who showed their bravery and fighting acumen in myriad WWI battles, as I stated in my review.

The first novel in the Ian Rutledge series, A Test of Wills, was published in 1996 and won the Barry Award and was nominated for the John Creasey Award in the U.K., the Edgar Award, and the Anthony Award. The Independent Mystery Booksellers Association named A Test of Wills one of the 100 favorite mysteries of the 20th Century, and it was a New York Times Notable Book of the Year.

Together, they have published nearly 40 titles, including two stand-alone novels, an anthology of short stories and more than 20 short stories.

“I gained personal satisfaction for seeing Caroline attain a life-long dream of becoming an author,” said Charles in an email.


When A Test of Wills was first published, few knew that the author was really a mother and son. It wasn’t so much a secret as just something they didn’t divulge. 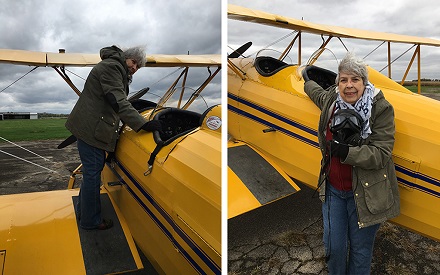 They registered at hotels using their real names because “because it is hard to use a credit card that has a pen name on it. On arrival at the hotel, we would add the Charles and Caroline names to the rooms so people could reach us,” said Charles in an email.

They did not make Caroline’s participation as co-author public until the fourth Rutledge novel, Legacy of the Dead, in 2000.

One reason that they delayed public notification of the co-authorship was because Caroline was diagnosed with Arrythmia with PAT. This was brought into control by 1999 and Caroline was able to join Charles in the rigorous travel promoting their books.

“Frankly, we had no idea A Test of Wills would be published much less receive the nominations and accolades it got. There was a learning curve [about being co-authors] more than a secret,” said Charles.

Once she was able, they would do events both jointly and separately. Sometimes, each would be on a different panel. “We found that we could cover more places attending simultaneous events. As much as possible, we did joint events,” he said.

(For those readers who wonder why I am using only the names Charles and Caroline Todd: Yes, we know that Charles Todd is a pseudonym for the mother and son. I will not diverge their real names as that is not my story to tell.) 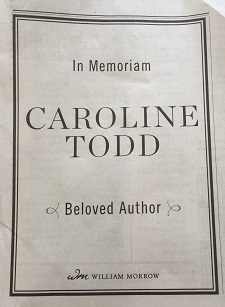 A Todd novel tells readers more about WWI than they will ever learn in a history book because the authors put a face on history, showing the emotion, motives and intensity of the characters.

And if they mention a fact, count on that fact being true. Hands-on research was a team effort. For example, as part of their research, they took a flying lesson in an open cockpit biplane similar to planes flown during the war. Their website charlestodd.com contains photos of both of them flying the plane.

During a Zoom event in July for The Irish Hostage, Caroline talked at length about Irish politics and history. Once again, making history as fresh and relevant as if it happened today.

“We learned early on that we both had to know the research equally,” Charles said.

The exception was on trips when they might go different ways on a given day to cover more ground. They traveled often to Great Britain, separately talking to area residents, soaking up the atmosphere of both the landscape and the people. They visited small villages, battlefields and viewed military weapons.

The writing was a true partnership. “There was no ‘Caroline writes this part and Charles that.’ We always would get two copies of all books we purchased for research and shared all of our notes. When Caroline or Charles say THEY were there or THEY learned that…. It is factual and based on our shared experience,” he added.

Caroline began visiting the U.K. when Charles was a small child so she had a 10-year head start. Caroline was able to explore 107 countries until COVID interrupted her yearly ritual. Charles said he learned his love of history and the U.K. from his mother. Later, Charles branched out into the U.S. Civil War and WWII on his own as Caroline did with the United Kingdom civil war and the Elizabethan period.

“But we shared even that research when it pertained to the writing as well as general conversation,” Charles added. 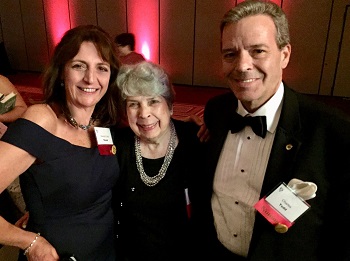 In addition to their well-respected work, Caroline—and Charles—are among the nicest people, standouts in the mystery community that is known for its plethora of generous writers.

She always made of point of saying hello to my brother-in-law, Peter, a major fan.

A lovely tribute to Caroline kicked off the 2021 Anthony Awards. It can be viewed here https://www.youtube.com/watch?v=qM6_p6T_JMA

Tributes to Caroline have come from myriad sources. Facebook and Twitter were filled with readers, authors, bookstore staffs, friends, and family members saying where and how they met the Caroline and how knowing her, even briefly, made an impact.

Classy, lovely, gracious, kind, compassionate are just a few of the adjectives people used in these posts.

Wendy Corsi Staub is among those giving tribute to Ca roline. The photograph of Straub with Caroline and Charles Todd, at left, was taken during the 2017 Edgar Awards when the three of them were nominees for the Mary Higgins Clark Award. (The Todds won for The Shattered Tree.)

“It marked my third nomination and third loss, but I swear I cried happy tears when they won,” remembered Staub. “They were so, so kind to me—we all held hands waiting for the announcement—and so jubilant when they won. As always, the ultimate class act. Love them, and still grieving Caroline.

“She was always so lovely--the utmost professional and a true lady,” added Staub. The last time they saw each other in person was when Caroline was the guest of honor and Santa at the 2019 MWA New York City holiday party. “It marked the last time many of us were able to get together,” she said. 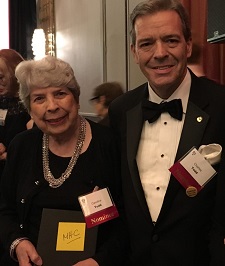 Her publisher, Wm. Morrow, published an In Memoriam notice in the New York Times. (Fourth photo above)

On a personal level, Caroline was an avid gardener and was interested in painting in oils, photography, and, of course, travel. She also had a deep love of animals and supported pet adoptions and dogs for veterans.

Caroline has often been described as “industrious,” and that certainly seems to fit. She completed her undergrad degree at the University of North Carolina in three years, which allowed her to get her master’s at the University of Pennsylvania in nine months. Her majors were history and international relations.

While at UPenn she met her husband, John Watjen. They married in 1958, then moved to Virginia where John completed his Ph.D.

After she received her master's degree and while dating her future husband, she worked at the Associated Press in the morgue (it's a newspaper term, look it up if you are unfamiliar with the phrase) and for the Editor in Chief. "In those days of the late 1950s, even with a master's degree, she was relegated to clerical work," said Charles.

After their two children were grown and on their own, Caroline picked up her career, this time as a writer.

Caroline was preceded in death by her parents, Martha Pearle and James Clifton Teachey, Jr., and John Watjen, her husband of 56 years. In addition to her son and his partner Diana, she is survived by her daughter, Linda, and her sister, Martha Teachey.

Caroline’s legacy continues in her books. The next two novels were completed before Caroline’s death. The next Ian Rutledge novel, A Game of Fear will be released in February 2022; with preorders now set up. The next Bess Crawford novel is scheduled to be released during July of 2022. Both will be published, as usual, by HarperCollins/Morrow.)

Several bookstores also are planning special events to coincide with the releases of the next novels. Charles is planning to attend as many as he can.

A memorial service is planned for late October. She will be laid to rest next to her husband and among her family in North Carolina.

The family requests any donations go to the Faithful Friends Animal Society, the Delaware Humane Society, Wilmington, Delaware, or the Needy Family Fund of Delaware. Each of these were near and dear to Caroline’s heart, added Charles.

An author’s legacy continues long after he or she has passed. As Charles Todd. Caroline has left a legacy that will be savored for generations.