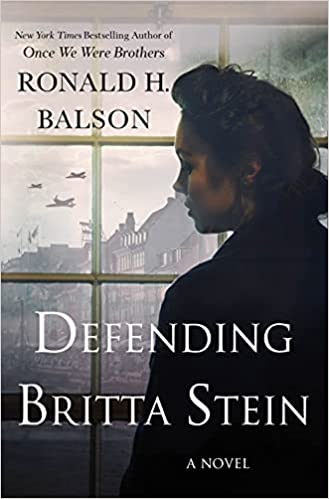 It’s 2018 in Chicago, Illinois, when the words “Liar,” “Traitor,” “Informer,” and “Nazi collaborator” appear as graffiti on the wall of a popular bar and restaurant owned by Ole Henryks. Henryks, a hero from Nazi-occupied Denmark, is set to be honored for his heroic actions and his lifetime of contributions to the city where he now lives. Who would attack him in this manner?

The identity of that person is quickly learned to be the titular Britta Stein, who is not only arrested for vandalism, but thanks to a glory hound lawyer who never met a camera he didn’t like, is facing a civil lawsuit for defamation as well. But the 92-year-old woman is no shrinking violet and claims that Henryks is anything but a hero; in fact, she says, he’s a wartime criminal who sold out the Danish Jews to the Nazis in World War II.

Attorney Catherine Lockhart ends up taking on the seemingly impossible case. Faced with a quick timetable before the trial, she needs all the information she can get from Britta in order to prove the woman is telling the truth. Lucky for her, Britta’s mind is sharp and her retelling of her life in Denmark just before and during the country’s occupation by Hitler’s forces takes readers in great depth and description to that time when the Nazi regime seemed unstoppable. Britta reveals all she knows about Henryks’ involvement with the Nazis—but being able to prove it is an entirely different matter. It’s up to Catherine and her investigator husband Liam Taggart to find the evidence to back up Britta’s claims.

Ronald H. Balson’s tale mixes a modern-day legal thriller with an in-depth history lesson about one country’s actions during World War II and does so not in a by-the-numbers academic lesson, but with a fascinating account that will have readers feeling each successive, oppressive step under the iron fist of Nazi Germany. The story is laid out in such a way that you get to know each of the characters intimately (both in the past and the present) and understand the actions they were motivated to take.

Set against a narrative that, however dramatized for the story, is more chilling than anything from the pen of Stephen King, Defending Britta Stein is a redemptive tale of seeking justice and setting the record straight, if however long delayed. It will stay with you long after the final page is turned.